This month sees a relatively static top twelve, with our top three shows in the same positions as last month. It highlights the incredibly high quality of the entertainment available in London's West End, the world's favourite theatre district, loved equally by visitors and residents. If you're planning a summer treat in the city, click this way for some of the best theatre ticket prices in town. Whether you love comedy or dance, drama or song, there's something special waiting for you.

This is the play's third month at number one, a record holder in our chart and a classic people just can't resist. Noel Coward is evergreen stuff, loved by every generation, and his work never seems to pall. This one is no different, and it looks set to delight audiences for some time to come. Funny, irreverent, wholly British... starring the wonderful Patricia Hodge, Caroline Quentin and Rory Bremner.
Relative Values Tickets
2. We Will Rock You

The rock musical to end all rock musicals, We Will Rock You closed two days ago and boy, it went out with a bang! Attracting massive audiences right to the last performance, we had a hard time keeping up with demand. If you've missed it, it's all over now. But a rush of sales over the past month keeps it firmly at number two in our chart for the second month running.
We Will Rock You Tickets
3. The Lion King

Last month's number three, The Lion King holds onto its place in our top three for a second month. The school holidays always see an extra-big rush for this fabulous show, adored by children of all ages and loved by grown-ups too. Laughter and tears, tension and joy, this lovely coming-of-age tale has everything you need for an unforgettable night out with the kids.
The Lion King Tickets
4. Jeeves and Wooster 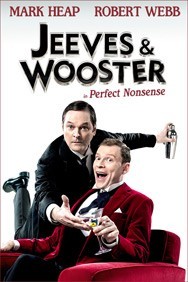 Our mid-May flash sale has shot Jeeves and Wooster's Perfect Nonsense back into our chart from nowhere, resulting in a number four position this time around. Supremely silly, it stars the amazing Robert Webb as the loveable, accident-prone, aristocratic fool Bertie Wooster and Mark Heap as Jeeves, written by David and Robert Goodale and based on the 1938 novel The Code of the Woosters.
Jeeves and Wooster Tickets
5. The Importance Of Being Earnest

A handbag? Meet Algernon 'Algy' Moncrieff, Cecily Cardew and co in the latest generation of Oscar Wilde's “Trivial Comedy for Serious People”. A hugely popular farce first performed on Valentine's Day in 1895, it's still making audiences roar with laughter much more than a century later. Oscar Wilde would have been absolutely delighted. Don't miss it!
The Importance Of Being Earnest Tickets
6. Les Miserables

Last month's number nine, Les Mis has crept further up our chart to achieve a number six position this time around. It's one of those shows that seems to hit audiences hard in a very human place, whether they're from China or France, the Philippines or the USA. Join several million theatre lovers who have already fallen in love with it and experience the joy and heartbreak for yourself. It's something you'll remember forever.
Les Miserables Tickets
7. Miss Saigon

The latest generation of the hugely popular Miss Saigon is making a splash, fresh in at number seven. A cracking musical by Claude-Michel Schönberg and Alain Boublil, with lyrics by Boublil and Richard Maltby Junior, this version is a long-awaited Cameron Mackintosh production that has been called 'mind-blowingly brilliant' as well as 'thrilling, soaring and spectacular'. It's obviously inspiring people from far and wide to visit theatreland. A love story with a difference...
Miss Saigon Tickets
8. Twelve Angry Men

In this definitive version of Reginald Rose's timeless script, an all-white jury of twelve is given the task of deciding the guilt or innocence of a young man accused of murder. The results is a tight, tense exposé of prejudice in the US legal system, first made into a 1957 movie starring Henry Fonda and now earning a well-deserved place at number eight in our chart. Serious, thrilling, disturbing.
Twelve Angry Men Tickets
9. Wicked

With music and lyrics by Stephen Schwartz and a book by Winnie Holzman, Wicked is inspired by the 1995 novel by Gregory Maguire, called Wicked: The Life and Times of the Wicked Witch of the West. Loved by teens, it's a fascinating coming of age story dealing with why the witches from Wizard of Oz became the women they became. Super stuff, highly entertaining and down two places from last month's number seven.
Wicked Tickets
10. Skylight

Brand new in from nowhere, Skylight is a play by the respected British dramatist David Hare. It opened at the Royal National Theatre, Cottesloe, directed by Richard Eyre, in 1995 and now it's back, straight into our chart at number ten. Starring Bill Nighy, it's an exploration of two ex-lovers who meet again down the line, and their rocky relationship: a potent, dangerous mix of opposing ideologies and mutual desires.
Skylight Tickets
11. Blithe Spirit

It's Oscar Wilde again, and Blithe Spirit is in our chart again for the third month running despite first being staged way back in in 1941. Back then it had a record breaking run. The play enjoyed several West End and Broadway revivals in the 1970s, '80s and noughties and this latest version, starring the marvellous Angela Lansbury as the hilariously inept medium Madame Arcati, is just as amusing and entertaining as ever.
Blithe Spirit Tickets
12. Phantom of the Opera

With bookings extended to 25th April 2015 at the beginning of May, we saw another surge of demand for one of theatreland's longest-running and best-loved musicals. The Phantom continues to delight audiences with its legendary show tunes, heartbreaking plot and sumptuous stage sets, testament to the talents of our very own Sir Andrew Lloyd Webber, Charles Hart and Richard Stilgoe. Beautiful.
Phantom of the Opera Tickets

With the summer break on the far horizon, the capital's theatres are hotting up for a bumper year. At this time of year theatreland takes on a new face as the tourists swarm in from all over the world to experience some of the planet's very best musicals, comedies, dramas and dance-led entertainment, both brand new and classic. Why not join them and take in the show of a lifetime? There's something for everyone...