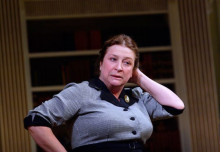 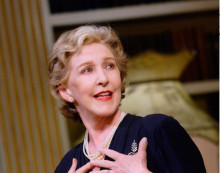 Trevor Nunn takes the reins to direct Relative Values from March 2014, joined by an extremely impressive star cast. Previously a smash hit at the Theatre Royal Bath, it’s the most recent Noel Coward play to bridge the gap between the famous Somerset venue and theatreland, giving even more of us the chance to find out why it was such a roaring success in the West Country.

What’s the story? Meet one family, an upstanding member of the English aristocracy. The young Earl, intends to marry a famous Hollywood actress. The family is uneasy but all seems well until it’s revealed that the star’s elder sister is none other than one of the family’s maids, Moxie. The infamous British stiff upper lip comes into play as the family desperately tries to pass Moxie off as an equal.

You’ll love seeing the Olivier Award-winning actress Patricia Hodge, Caroline Quentin, Rory Bremner and Ben Manfield take to the stage in a production that’s tipped to generate a full house night after night, joined by Leigh Zimmerman as Miranda Frayle. Patricia Hodge picked up an Olivier for her 1999 role in Money at the National Theatre and has generated excellent reviews in TV’s Miranda, Betrayal and Hotel Du Lac, amongst others. Caroline Quentin and Rory Bremner are both known and loved for their popular British TV comedies as well as being fine actors. And Ben Mansfield comes fresh from television’s Primeval, having also caused much hilarity at the Theatre Royal Haymarket’s smash hit play, One Man, Two Guvnors.

Quirky, wry, naughty and revealing, Relative Values runs from 14th April 2014 to 21st June 2014, with previews from Wednesday 19th March. It joins another Coward classic in London, Blithe Spirit at the Gielgud Theatre. The designs are by Stephen Brimson-Lewis, lighting comes courtesy of Tim Mitchell, the sound is by Fergus O’Hare and assistance comes from the talented music consultant Steven Edis.

As Charles Spencer said in The Telegraph, reviewing the production in Bath:

“Noël Coward’s Relative Values is the kind of play that turned John Osborne into an angry young man. It’s reactionary, snobbish and, at its best, wonderfully entertaining. It was written during the dying days of the Attlee government and premiered after Churchill and the Tories had returned to power. You get the feeling that Coward was heaving a big sigh of relief that Socialism appeared to have had its day.”

Love Noel Coward? If you’d like to buy Relative Values cheap tickets, we offer the full range of seating types, from low cost to premium, all with excellent availability.