It’s been another thrilling month in London’s West End and we have another brand new top twelve shows chart for you, full of surprises as usual. It’s hard to predict which shows will fire theatregoers’ imaginations month on month, and it’s always an exciting moment when we discover what’s hit the big time in the past 30 days or so. Here is our latest top twelve. Pick your favourites, buy tickets through us and you’ll snap up a real bargain…

Enjoying a second month in our number one chart slot makes Relative Values something very special indeed. Most of us love Noel Coward’s provocative, naughty, wickedly funny plays, but this one’s obviously an all-time favourite. Grab your seats for a fresh, irreverent look at Britain’s Middle Classes courtesy of the popular TV and stage stars Patricia Hodge, Caroline Quentin and Rory Bremner.
Relative Values Tickets
2. We Will Rock You

Shame… We Will Rock You finally closes its doors at the end of the month, and it will be sorely missed by rock fans the world over. If you haven’t seen this wonderfully uplifting Olivier-winner of a take on a horribly dystopian rock-free future, now’s your last chance. If you love Queen’s music, you only have a few weeks left to enjoy it on stage in a genuinely unforgettable format that’ll rock your world.
We Will Rock You Tickets
3. The Lion King

Zooming back into our chart after a short absence, this show is adored by little people all over the world with its engaging characters, moving story, beautiful costumes and mind-blowing stage sets. Do you have time to take your children to the theatreland experience of a lifetime this month? If so you’ll be in good company – it’s just as popular as ever. Bring it on!
The Lion King Tickets
4. Good People 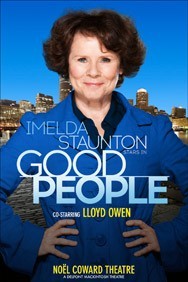 This fine drama opened at the beginning of the month and has caused a real stir in the West End. After a magical sell-out run at Hampstead Theatre, the dark and very funny Good People transfers to the magnificent Noël Coward Theatre for a limited 10 week run. It stars the Olivier winner Imelda Staunton and Lloyd Owen, both glittering stars in Britain’s entertainment firmament.
Good People Tickets
5. Blithe Spirit

The second Noel Coward masterpiece in our chart for the second month running, we still have top price seats at just £59, down from the usual £64, for Blithe Spirit on Saturday 3rd May and Saturday 10th May. Angela Lansbury awaits you, star of small screen and silver screen, at her wicked best on stage for this particularly sharp and funny play.
Blithe Spirit Tickets
6. Charlie and The Chocolate Factory

How can you resist those cute little Oompa Loompas? It looks like resistance is futile, as evidenced by this this lovely show’s climb up our chart, last month’s number eleven and this month’s number six. A mouth-watering experience for chocolate lovers (just imagine… a chocolate river!) and great fun for all the family, the sets, costumes and show tunes really are good enough to eat.
Charlie and The Chocolate Factory Tickets
7. Wicked

The untold story of the witches of Oz, good and bad, continues to delight teenaged audiences in particular, a hugely popular tale with a sting in its tail. The winner of a UK Olivier Award for the Most Popular Show, an Evening Standard Theatre Award (UK) for Best Night Out and Whatsonstage.com awards including Best West End Show and Best Music, the extensive list of accolades and awards goes on and on. Not to be missed!
Wicked Tickets
8. The Book of Mormon

This hilarious and thought-provoking show has won four Olivier awards this year, and counts as one of the biggest runaway hits in town. Flying into our chart from nowhere, The Book of Mormon is the biggest Broadway musical smash of recent times and it’s causing an equally big stir in London. It’s set to repeat its phenomenal US success as two earnest young Mormon missionaries, Elder Kevin Price and Elder Arnold Cunningham, take to the British stage.
The Book of Mormon Tickets
9. Les Miserables

Good old Les Mis pops in and out of our chart like a Jack-in-the-Box. This time around it’s the musical’s latest success, winning audience awards at the Oliviers, which has brought it back to our attention and inspired thousands more of us to give it a whirl. High drama, love, terror, betrayal, revolution and death… now that’s what we call a musical!
Les Miserables Tickets
10. Twelve Angry Men

Last month’s number three, Twelve Angry Men hangs in there at number ten this month. The 1957 movie of the same name starred Henry Fonda, and soon became a winning cinema classic. Some feel it’s the best ever courtroom drama… and the fact that it’s almost wholly played out on a single stage set makes the drama even more taut. A perfect fit for the stage and a play that just keeps on giving… a class act if there ever was one.
Twelve Angry Men Tickets
11. I Can't Sing! The X Factor Musical

Our flash sale in late April shot Harry Hill’s beautifully silly take on the famous TV talent show to eleventh place in this month’s chart, up one from number twelve last month despite the show closing early. You have until 10th May to enjoy the fun before it closes its doors. The musical parodies the TV show and the brilliant Simon Cowell is one of the show’s producers. Catch it while you can!
I Can't Sing! The X Factor Musical Tickets
12. Jersey Boys

Another enduringly popular musical, this time based on the real-life story of Frankie Valli and The Four Seasons, Jersey Boys has been in and out of our monthly chart for a long time. Now it’s back yet again, a joyful, feel-good performance rich in smash chart hits, a fascinating trawl through the troubled lives and challenges faced by one of the best-loved soul bands on earth. Fantastic Olivier Award winning stuff, a real sing-along treat.
Jersey Boys Tickets

What’s on the horizon? Jeeves and Wooster, which recently won an award for Best New Comedy at the Oliviers, is lurking just under our top twelve. Perhaps it’ll be back in the fold next month. And the all-time classic Phantom of the Opera is also bubbling under yet again, another hopeful for a chart position next month and a musical that’s entertained a whopping 130 million or more of us over the decades. Wow. We’ll be back next month. In the meantime, here’s wishing you a fine time in the wonderful West End.