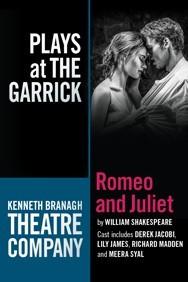 What's new in our top 12 best theatre shows list this time around? The Painkiller, Charlie and the Chocolate Factory, Matilda the Musical, Beautiful - The Carol King Musical, No Man's Land and The Maids have all fallen out of our chart this month. They're replaced by a crop of new big-hitters, all designed to thrill theatregoers and raise the roof as summertime approaches. Here's what our customers loved best over the past 30 days.

It's a full four centuries since Britain's finest and most famous playwright popped his clogs, and theatreland is awash with celebrations. Romeo and Juliet remains one of Shakespeare's most popular plays, and this version is playing at the Garrick, starring Lily James and Richard Madden. Part of the long-awaited and well-respected Kenneth Branagh season, you can fully expect oodles of that unforgettable Branagh magic. A classic love story-turned tragedy.
Romeo and Juliet Tickets
2. Motown

Still at number two in our chart for a second month running, ticket sales for this marvellous musical illustrate just how popular the Motown music genre is, loved by every generation since it first hit our radios and turntables in the early 1960s. Legendary songs by Diana Ross and the Supremes, Michael Jackson, Stevie Wonder, Smokey Robinson and more await you in one of the best jukebox musicals to hit theatreland for ages.
Motown Tickets
3. Doctor Faustus 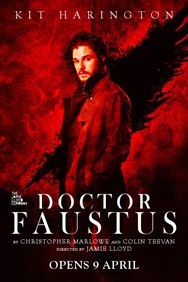 Faustus has held onto our number eleven slot for three months now, a hugely popular show that's capturing the imagination of thousands of theatregoers. Christopher Marlowe is the playwright, the piece was first performed way back in 1592 and the power of the story goes on and on, unchanging through the centuries. A stage romp you won't forget in a hurry, it's enormously entertaining.
Doctor Faustus Tickets
4. The Play That Goes Wrong

Take one generous no booking fee offer, add plenty of giggles night after night and you can see why this splendidly silly farce of a comedy has so many fans. Written by the Mischief Theatre Company, Henry Lewis, Jonathan Sayer and Henry Shields are responsible for leaving thousands of us in pieces, having laughed ourselves into a state of exhaustion, and the laughs continue. If you love a fast-paced comedy, don't miss this one.
The Play That Goes Wrong Tickets
5. Thriller - Live

Do you fancy revisiting the sheer, breathtaking wonder of Michael Jackson's music at a ridiculously low price? No problem. We're selling discounted seats at more than 40% off, giving you bargain-basement access to one of the most popular and well-loved jukebox musicals on the planet. No history, no plot, just tune after tune written and performed by a group of dancers and singers who have that unmistakeable Jackson sound and style down to a tee. Perfect.
Thriller - Live Tickets
6. Mamma Mia!

At number five in last month's list, Abba's brilliant chart hits continue to delight huge audiences through spring. A contemporary plot packed with entertaining quirks, twists and turns meets some of the finest disco tunes in history to create a musical extravaganza designed for dancing, written to highly entertaining perfection by the popular British playwright Catherine Johnson. What's not to like?
Mamma Mia! Tickets
7. The Lion King

Last month's number four, The Lion King has slipped a little this month but we're tipping a return to a top chart position as soon as the school summer holidays kick in. It happens every year, as a fresh crop of youngsters discover the cartoon movie for the first time and their folks treat them to the real thing on stage. Whatever your age it's a gorgeous production, rich in stunning effects, amazing costumes and unforgettable show tunes.
The Lion King Tickets
8. The Entertainer 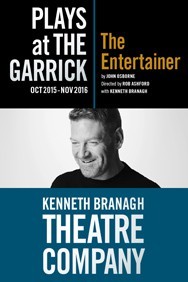 At number nine last time around, this splendid play is up one place for May. John Osborne is the creator, and the play stars British stage superstar Kenneth Branagh himself as Archie Rice, along with the supremely talented Jonah Hauer-King, John Hurt, Crispin Letts, Sophie Mcshera and Greta Scacchi. On stage from August this year, the excitement is mounting fast... if you love plots where public masks reveal private torment, this is for you.
The Entertainer Tickets
9. The Comedy About A Bank Robbery 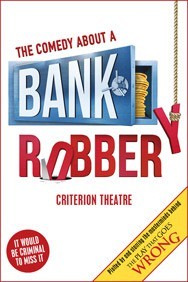 Our no booking fee offer on this hilarious comedy drove sales skywards through April, and the signs are looking good for this month too. The excellent Mischief Theatre Company is at it again, creators of the sensational, multi-award-winning The Play that Goes Wrong and Peter Pan Goes Wrong. This time around eight hopeless characters decide to rob a bank and total hilarity ensues. A catalogue of disasters guaranteed to make you giggle.
The Comedy About A Bank Robbery Tickets
10. The Book of Mormon

Number 8 in our chart last time, this time Mormon is down a couple of places, but it's clear the appeal of this seriously funny comedy just keeps on coming. If you love an hilarious religious satire of a musical and laughed yourself silly at TV's South Park, a truly legendary cartoon series, the musical comes with a book, lyrics, and music by Trey Parker, Robert Lopez, and Matt Stone. When two hapless missionaries find their way to a remote village in Uganda, all hell lets loose...
The Book of Mormon Tickets
11. Kinky Boots 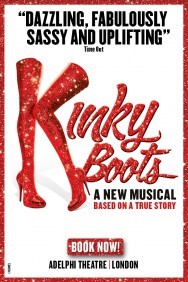 Another of our special no booking fee offers hurls Kinky Boots back into our chart this month, a heart-warming story based on a true tale of an ailing shoe factory whose fortunes are reversed in the most fantastic way thanks to a brand new target audience of glamorous drag queens. The Broadway musical won a massive fan base thanks to music and lyrics by Tony, Emmy and Grammy-winner Cyndi Lauper and a book by Tony award winner Harvey Fierstein.
Kinky Boots Tickets
12. Wicked 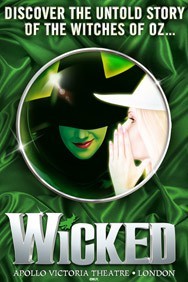 Our fourth no booking fee offer for May delivers great value for money yet again, as the untold Story of the Witches of Oz is revealed. Expect a fabulous show with music and lyrics by Stephen Schwartz and book by Winnie Holzman, telling the potent tale of Elphaba, the infamous Wicked Witch of the West, and Glinda, whose different viewpoints and personalities clash dramatically. Elphaba's very public fall from grace is the ultimate show-stopper, with three Tonys and six Drama Desk awards behind it.
Wicked Tickets

May is our London Theatre Month, a celebration of everything good in the capital's theatre district with a host of exclusive discounts and theatre tickets on sale from just a tenner. If you haven't been to the theatre for ages, now's your chance to grab the bargain of a lifetime and take in all your favourite shows in one month. London awaits you, the lights are bright, the nights are light and warm and the place is buzzing!