The Play That Goes Wrong description

What's the story? Cornley Polytechnic Drama Society have received a very large and surprising inheritance. But they're hilariously inept and accident prone. When they begin producing a complex and ambitious murder mystery, first written in the 1920s, disaster strikes and things go rapidly downhill.

As everything that could possibly go wrong goes horribly wrong, the players begin to crack under the pressure. It's debatable whether they'll ever get the play back on track in time for the final curtain. Will they manage to pull it off?

The Independent newspaper said the play reduced their reviewer to tears of joy. What's on Stage said it's a piece of effortless slapstick that Buster Keaton and Charlie Chaplin would be hard pushed to trump.

The Times called it an immaculately staged production that roused “even a staid matinee audience to hysteria”. And the production has attracted a host more excellent reviews for this “seamless flow of physical comedy and exceptionally strong ensemble understanding”.

If you're looking for two and a half hours of complete, unrestrained, riotous comedy, this one's for you. The Mischief Theatre Company has already enjoyed two hugely successful West End runs of the play as well as a substantial Edinburgh Festival hit, and it's guaranteed to leave you in pieces... but in a good way! Now it's at the Duchess Theatre after a 21 week UK tour.

Think the British hit TV series Fawlty Towers and you get the picture. It'll have you aching with laughter. It's the lucky winner of the 2014 Best New Comedy award from What's on Stage and is directed by Mark Bell, designed by Nigel Hook with lighting by Ric Mountjoy, and presented by Kenny Wax Ltd and Stage Presence Ltd. The stars of the show include Chris Currie, Dave Hearn, Rob Falconer, Henry Lewis and Alys Metcalf, plus Charlie Russell, Jonathan Sayer, Henry Shields, Greg Tannahill and Nancy Wallinger.

The Play That Goes Wrong tickets – Tickle your funny bone!

It's more than a laugh a minute. It's non-stop giggle-fest. If you’d like to secure The Play That Goes Wrong cheap tickets, we offer the full range of seating types, from low cost to premium, all with excellent availability.

The Play That Goes Wrong photos 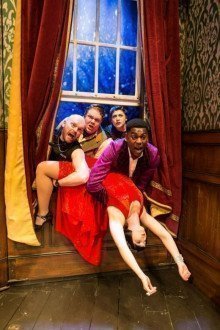 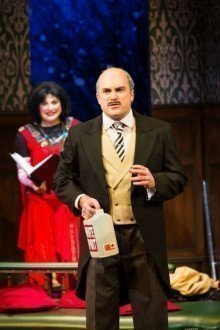 The Play That Goes Wrong video

The Play That Goes Wrong news