This month’s top twelve West End shows reflect the productions our customers loved best during April. It’s great to see such a wide variety of shows hitting the mark, revealing the very best London’s West End has to offer. The Olivier Awards this week highlighted the sheer quality of theatreland’s legendary stage magic, hailed as being the best it has been for decades, perhaps the best it has ever been. If you needed an excuse to book tickets for a smash hit show in one of the most beautiful cities on earth, here it is!

Up from number two in April, Top Hat’s extension ‘til April 2014 continues to have an impressive impact, with all those who thought they’d missed the boat buying their tickets and flocking to enjoy this gloriously sophisticated piece of classic Irving Berlin eye candy.
Top Hat Tickets
2. The Lion King 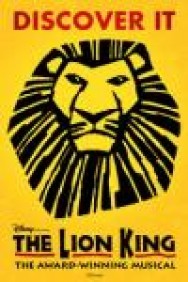 Last month’s number seven in our chart, The Lion King is obviously on a roll, as popular with children as ever and a roaring hit for the fourteenth year running, with no sign of the pleasure coming to an end. A proper treat for your children.
The Lion King Tickets
3. The Bodyguard 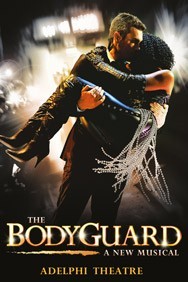 It’s spring, and love is in the air. Perhaps that’s why The Bodyguard has leapt into our chart from nowhere to hit the number three spot. Or maybe it’s because of our extremely popular 35% off flash sale, which boosted the show’s popularity throughout April. Either way it’s both unforgettable and un-missable.
The Bodyguard Tickets
4. We Will Rock You 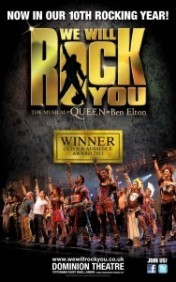 Up one from April’s number five slot, We Will Rock You continues to deliver plenty of thrills and magic for fans of rock music and quirky comedy alike. Right now it’s on stage ‘til October, but you never know… it’s such an enduring hit that an extension might be in the wind. Watch this space!
We Will Rock You Tickets
5. Untold Stories 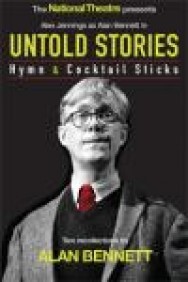 Fresh in at number five, our 48 hour flash sale earlier in April offering 20% off ticket prices has had a big impact. Written in 1997 when Alan Bennett thought he only had a year to live, the play covers two intimate and personal autobiographical recollections, performed to perfection by the extremely talented Alex Jennings. Not to be missed.
Untold Stories Tickets
6. Henry V

Part of the wonderful Michael Grandage season, Henry 5th has struck a chord, leaping into our chart at number six. Tickets are also available for The Cripple of Inishmaan with Daniel Radcliffe and A Midsummer Nights Dream with Sheridan Smith and David Walliams, the 3rd and 4th in the season.
Henry V Tickets
7. A Chorus Line 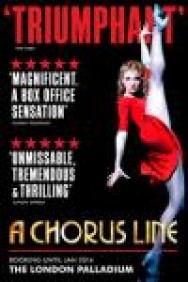 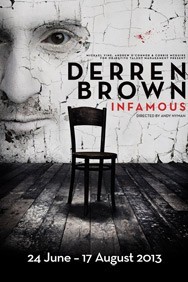 The anticipation is almost palpable as the magical Derren Brown’s new show waits in the wings to take over from Singin’ in the Rain at the Palace Theatre. Like all his shows, you can expect something truly remarkable, and it’s already at number 8 in our chart.
Derren Brown: Infamous Tickets
9. Les Miserables 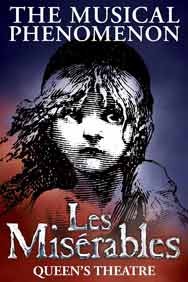 Down three this month from last month’s number six position, Les Mis continues to delight audiences of every age and taste. Seen by more than 65 million of us spanning 42 countries and 22 languages, it’s in its 28th year and still breaking records. Revolutionary stuff!
Les Miserables Tickets
10. Jersey Boys 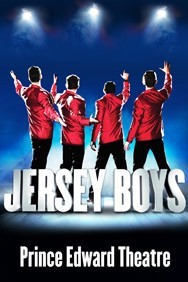 Another newcomer to our chart, Jersey Boys’ foot tapping, finger snapping tunes tell the tale of Frankie Valli and the Four Seasons and their often torrid, troubled route to fame and fortune. Perfect for over 12s and a real musical odyssey. Big Boys Don’t Cry… but you might!
Jersey Boys Tickets
11. Thriller Live

Up one from April’s number twelve chart position, Thriller Live draws Michael Jackson fans and music lovers alike, packed solid with wonderful Jackson hits and about as funky as it gets. The perfect tribute to an extremely talented artist, complete with some of the most incredible dance moves you’ll ever see.
Thriller Live Tickets
12. Phantom of The Opera

Down from number eight in April, The Phantom of the Opera weaves that unmistakable Lloyd Webber magic to the delight of huge audiences night after night. A West End staple, you can’t beat the Phantom for drama, beautiful music, amazing stage sets and a story sad enough to break the hardest heart.
Phantom of The Opera Tickets

Will your favourite show hit our chart next month? Help it along its way by buying great value tickets for the best shows in town right here, with excellent availability on every seat and ticket type. We’ll see you soon!