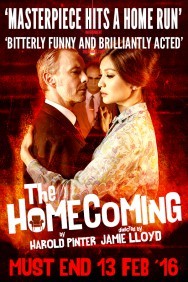 We hope you had a wonderful winter break. Here's wishing all our customers a very happy New Year, filled with theatrical thrills and stage-inspired pleasure! And here's our top twelve West End shows chart for December 2015, revealing the productions people loved most during the final month of last year. What show are you going to see first in 2016? Here's some inspiration.

At number three in out chart last time around, this time The Homecoming hits the number one slot. This two act play was written by the wonderful Harold Pinter in 1964 and published in 1965. We're offering tickets at 58% off, valid for performances until 8th January, so get your skates on to see an enigmatic masterpiece of a play in its 51st year. It's a multi-award winning contemporary classic and widely regarded as Pinter's best work. And with director Jamie Lloyd on board, it's a chunk of pure class.
The Homecoming Tickets
2. The Book of Mormon

This splendid musical comedy has been popping in and out of our chart since it first opened, and now it's back in at number two. The show comes from the hilarious pen of South Park cartoon series creators Trey Parker and Matt Stone, and the soundtrack is the biggest selling cast album for four decades. Add a Grammy Award for Best Musical Theatre Album, blend in a sharply satirical and irreverent script and you can understand why it's such a side-splitter.
The Book of Mormon Tickets
3. Charlie and The Chocolate Factory

At number 9 in last month's chart, Charlie and his lovely granddad are back in the top three yet again. There's something about the festive season that brings out the best in people, and this charming tale about one delightful boy amongst a load of truly horrid children, and his adventures with the magical Mr Willy Wonka, plucks the heartstrings particularly well at this time of year. If you fancy something vibrant and bright to cheer up a gloomy January, click this way!
Charlie and The Chocolate Factory Tickets
4. The Painkiller 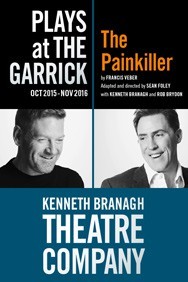 New in at number four, this is an hilarious comedy carefully adapted by Sean Foley from Francis Verber's brilliantly funny French farce 'Le Contrat'. This particular production saw its première at the Lyric Theatre in Belfast, back in 2011, and it's a comic-tour-de-force to reckon with. What's the score? Two men sit in two hotel rooms with an adjoining door. One is a murderer, the other is determined to die. What could possibly go wrong? Everything. It's a fast paced physical comedy you won't forget in a hurry.
The Painkiller Tickets
5. Funny Girl 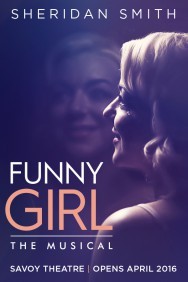 Last time Funny Girl was at number two in our chart, and it's still here. It's more than four decades since the first London production hit the stage and this is the first ever revival. It is a genuinely iconic musical and sold out in no time at the Menier Chocolate Factory, where it debuted. What's the plot? When film star and comedienne Fanny Brice meets Nick Arnstein, sparks fly from both ends. Now's your chance to experience one of the best-loved Broadway classics in a brand new West End production.
Funny Girl Tickets
6. The Play That Goes Wrong

At number four in our chart last time, The Play That Goes Wrong continues to delight laughter-starved audiences night after night. This is one of the silliest, funniest, most outrageously amusing and side splitting comedies to take to the stage for some time, and it has audiences in fits every night. Join the Cornley Polytechnic Drama Society as they try their terrible best to stage a complex murder mystery drama as everything collapses in utter chaos around them. Absolutely fabulous.
The Play That Goes Wrong Tickets
7. Jersey Boys

Number ten last time around and our Show of the Month this time, you'll save as much as 55% off seats for this splendid jukebox musical, with tickets from just twenty five quid a go. Bargain! If you remember the music of Franki Valli and the Four Seasons you'll adore this soul music-soaked production packed with wonderful chart hits and telling the fascinating story of a bunch of lads who never dreamed their musical talents would take them so far.
Jersey Boys Tickets
8. Hangmen 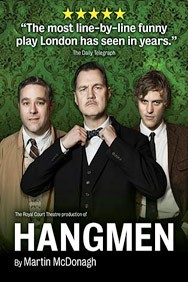 Harry is England's second best hangman. He runs a little pub in Oldham, and he's a small-scale local celebrity. The thing is, they've abolished hanging... so what does Harry do next? His pub is jammed full of junior newspaper reporters and sycophantic regulars, and they're all keen to find out what Harry thinks about the news. But there's also a sinister stranger in the pub, and his motive for visiting the place is very different. Starring David Morrissey, Andy Nyman and Johnny Flynn, it's a must-see for 2016.
Hangmen Tickets
9. Sunset Boulevard 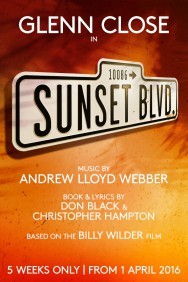 The ageing silent movie star Norma Desmond sits in her Hollywood mansion on Sunset Boulevard, lonely and bored. When the dodgy film screenwriter Joe Gillis turns up on the doorstep, fleeing from debt, he thinks he's found an easy way out. But Norma is a nightmare, and it's a case of out of the frying pan and into the fire. Norma's script, written to support her dramatic return to the silver screen, isn't too good, and Joe offers to help out. But she falls for him and things soon go from bad to a great deal worse. Not to be missed.
Sunset Boulevard Tickets
10. Billy Elliot 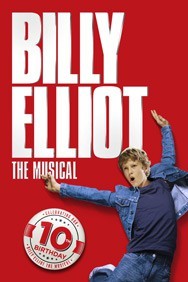 Last time Billy Elliot returned to our chart at number six, and it proved hugely popular over Christmas and the New Year. Elton John wrote the music, a treat in itself, and the story is a real heart warmer. Set in a northern mining town, it's a truly inspirational tale of one boy's struggle to make his dreams come true. Billy hates boxing... but he adores ballet. When he discovers his true passion it inspires his entire family and community as well as changing his own life forever. Lovely.
Billy Elliot Tickets
11. Goodnight Mister Tom 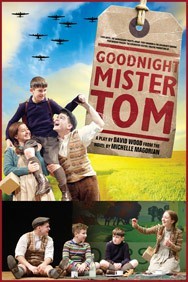 This delightfully uplifting story is brought to sparkling life by David Wood. The plot unfolds during the dangerous build up to World War Two and follows a sensitive young lad William Beech, evacuated to the lovely English countryside where he and the elderly recluse he's billeted with, Tom, forge a close and heart warming friendship. Everything's wonderful until William's abusive mother suddenly summons him home to London. It's BAFTA winning stuff and you will cry... but in a good way!
Goodnight Mister Tom Tickets
12. Wicked

New in again after a short absence, Wicked is one of those shows that brings loads of festive cheer, and it has been in and out of our top 12 shows chart since the first chart we collated. Wicked has been casting a spell over audiences since 2003 and has won more than 90 international awards, a real West End sensation. The show played its 3000th performance in autumn 2013 and it's still going strong. Teens love it, adults adore it, it's a musical theatre winner.
Wicked Tickets

What's going to be the biggest West End hit for 2016? Who can tell... but there are some marvellous productions coming your way as well as a feast of existing shows that just keep on giving. Whether you choose a brand new musical, a revival comedy or a serious, thought-provoking classic, we'll be with you all the way for the next twelve months. Come back at the end of January for our next chart, and grab tickets for your next big theatre night out soon.