by Best of Theatre Staff on Friday 17 September 2021, 10:29 am in Cast Changes and Announcements 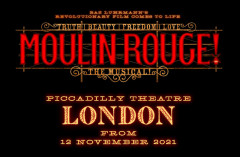 Global Creatures, the producer of Moulin Rouge! The Musical, is thrilled to announce today the cast for the UK premiere of the acclaimed show, which begins performances at the Piccadilly Theatre in London on Friday 12 November 2021, with Press Night on Wednesday 8 December 2021 (at 7:00pm).

Liisi LaFontaine (Good Trouble, Dreamgirls) will star as Satine, the sparkling diamond at the heart of the Moulin Rouge, and Jamie Bogyo (making his West End debut) will star as aspiring writer Christian.

Clive Carter (Olivier Award nominee for his performance as the Prince/Wolf in Into the Woods, and as Claude in Come From Away) will play the legendary Moulin Rouge impresario, Harold Zidler.

The principal casting also features Simon Bailey (Heathers, Jersey Boys) as The Duke, Jason Pennycooke (Olivier Award nominee for his performance as Lafayette/Jefferson in the original cast of Hamilton, Bobby Dupree in Memphis and Jacob La Cage Aux Folles) and Elia Lo Tauro (On Your Feet, Carousel) as the Bohemians Toulouse-Lautrec and Santiago.

The club’s famed entertainers known as the ‘Lady Ms’ will be played by Sophie Carmen Jones (Chicago, Jersey Boys) who will be Nini, Zoe Birkett (Priscilla Queen of the Desert, Hair) as Arabia, Jonathan Bishop (Hamilton, In the Heights) who will play Baby Doll and Timmika Ramsay (Cinderella, Madagascar) as La Chocolat.

“Creating Moulin Rouge! The Musical has been a singularly thrilling and unique experience. I am delighted today to announce the incredible group of actors who will bring this production to life in London. We have brought together a thrilling, hugely talented group of artists, and in Liisi and Jamie, we have two outstanding actors to lead our company. We are all so excited to now start creating the show for UK audiences!” said Alex Timbers, director of Moulin Rouge! The Musical.

Enter a world of splendour and romance, of eye-popping excess, of glitz, grandeur and glory! A world where Bohemians and aristocrats rub elbows and revel in electrifying enchantment. Pop the champagne and prepare for the spectacular spectacular...Welcome to Moulin Rouge! The Musical.

Moulin Rouge! The Musical is produced by Carmen Pavlovic and Gerry Ryan OAM for Global Creatures and Bill Damaschke. The Executive Producer in the West End is Patrick Murphy and General Management is by Playful Productions.

Set in Paris, 1899, a world of indulgent beauty and unparalleled extravagance, of bohemians and aristocrats, of boulevardiers and reprobates, Moulin Rouge! The Musical is the story of a lovesick American writer, Christian, and Satine, the dazzling star of the Moulin Rouge nightclub.

When their lives collide at the Moulin Rouge, they fall hopelessly in love, only to be thwarted by the nightclub’s host and impresario, Harold Zidler, and The Duke of Monroth, the wealthy and entitled patron of the club who thinks he can buy anything he wants, including Satine. Together with his Bohemian friends – the brilliant and starving artist Toulouse-Lautrec, and the greatest tango dancer in all of Paris, Santiago – Christian stages a musical spectacular in an attempt to save the Moulin Rouge and win the heart of Satine.

Baz Luhrmann’s iconic film comes to life onstage, remixed for today in a new musical mash-up extravaganza. Moulin Rouge! The Musical invites you to enter a world of passionate romance and eye-popping splendour… a place where Bohemians and aristocrats revel together in electrifying enchantment… a place where all your wildest dreams come true!

Bringing Moulin Rouge! The Musical to the stage was a decade-long journey, spanning 3 continents, encompassing 75 songs credited to 165 songwriters, administered by 31 publishers, representing over 160 years of music, including recent hits released since the movie premiered 20 years ago.

The Moulin Rouge! The Musical original Broadway Cast Album, which debuted at No.1 on Billboard’s Cast Albums Chart, is available at all digital and streaming providers by Baz Luhrmann’s label, House of Iona, and RCA Records.

Prior to the pandemic, Moulin Rouge! The Musical had been performing on Broadway at the Al Hirschfeld Theatre where it opened to widespread critical acclaim on 25 July 2019. Productions have also been announced for Australia, Japan and a North American Tour.

A theatrical celebration of Truth, Beauty, Freedom and — above all — Love, thisis more than a musical… it is a state of mind. Welcome to the Moulin Rouge!