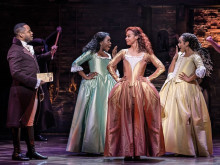 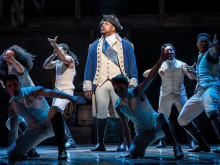 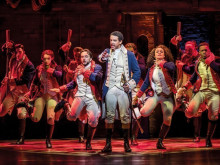 So far Hamilton has enjoyed huge critical acclaim and amazing box office success. And the show is set to dominate the Tony Awards for 2016, with an epic 16 Tony nominations, more than any other musical. The Producers and Billy Elliot both snagged 15 nominations, falling short of this new hit, and the rap and B&B tunes that stud the story like jewels make it one of the most unusual musicals of the century so far.

Hamilton the Musical reveals the story of America's birth and the tale of Alexander Hamilton himself through rap and R&B. So how did the idea come to fruition? It turns out that Lin-Manuel Miranda discovered Chernow's book at the airport while on holiday. Just two chapters in he was hooked, and soon found himself imagining what it'd be like to create a musical inspired by the great man's life story.

He wasn't alone. 1917 saw Hamilton's life transformed into a play on Broadway, starring George Arliss as Alexander Hamilton. But it hadn't been touched since. Miranda kicked the project off immediately, working on a 'Hamilton Mixtape' in his spare time. In spring 2009 he was invited to perform at the White House at an Evening of Poetry, Music and the Spoken Word. He presented the first song from his tape, a rough and ready version of the hit show tune Alexander Hamilton. A year later he was still working on the show tunes, busy getting My Shot into shape for the stage.

It wasn't until summer 2013 that Miranda performed a workshop production of the show at the Vassar Reading Festival, directed by Thomas Kail with music direction by Alex Lacamoire, who also accompanied on piano. 2015 saw the show released Off Broadway, where it instantly sold out. It transferred to Broadway that August, and the rest is history.

If you love rap and R&B music, and you'd love to know more about the man who helped create America as we know it, you'll adore this spectacular show. It's top class stuff, spangled with excellent tunes including Aaron Burr, Sir, My Shot, The Story of Tonight, The Schuyler Sisters, Farmer Refuted, You'll Be Back, Right Hand Man and a whole lot more, each as compelling as the last.

Hamilton the Musical tickets – A show with 16 Tony nominations

If you’d like to buy Hamilton the Musical cheap tickets we sell every type of ticket, from low cost to top of the range, all with great availability. 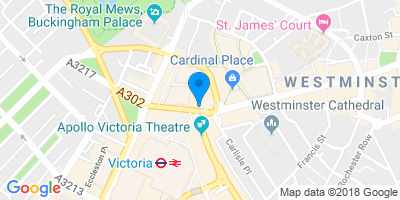 Children under 3 will not be admitted. Adolescents under 16 must be accompanied by an adult.

As capacity restrictions are lifted, we ask that all audience members bring with them proof of double-vaccination, a recent negative lateral flow test or natural immunity.

West End production of Hamilton to return from 19 August 2021

West End production of Hamilton to return from 19 August 2021