by Best of Theatre Staff on Thursday 24 February 2022, 9:09 am in Cast Changes and Announcements 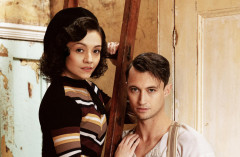 DLAP Group are thrilled to announce that Frances Mayli McCann and Jordan Luke Gage will star as the titular Bonnie and Clyde in the West End premiere of the cult-sensation BONNIE AND CLYDE THE MUSICAL, opening at the Arts Theatre from Saturday 9 April 2022.

Following the extraordinary reaction to her performance as Bonnie in Bonnie and Clyde In Concert in January 2022, Olivier-Award nominated Frances Mayli McCann reprises the role in this full production at The Arts Theatre, performing alongside West End star Jordan Luke Gage as Clyde.

They join the previously announced Natalie McQueen as Blanche Barrow and George Maguire as Buck Barrow. The full company includes Cleve September as Ted and Ako Mitchell as Preacher, Pippa Winslow as Cumie Barrow/Governor Miriam Ferguson/Eleanore, Gracie Lai as Emma Parker/Stella, Alistair So as Sheriff Schmid, Alexander Evans as Henry Barrow/Deputy Johnson, Ross Dawes as Captain Frank Hamer, Barney Wilkinson as Bud/Archie and swings Charlie McCullagh and Annie Guy. Casting for the roles of Trish and Young Bonnie and Clyde to be announced.

Frances Mayli McCann is an Olivier Award nominated actress, who originated the role of Kylah in Our Ladies of Perpetual Succour. Her other West End credits include Heather McNamara in Heathers at the Theatre Royal Haymarket, The Mistress in Evita at Regent's Park Open Air Theatre and Eponine in the UK and International Tour of Les Misérables.

Jordan Luke Gage is best known for his portrayal of Romeo in the Olivier Award winning &Juliet at The Shaftesbury Theatre. His other West End credits include Strat in Bat Out Of Hell at The Dominion Theatre and JD in Heathers at Theatre Royal Haymarket. His television credits include playing Adrian Barber in ITV's Cilla, and Luc in Cucumber on Channel 4.

Natalie McQueen's West End credits include playing Doralee Rhodes in 9 to 5 The Musical at the Savoy Theatre, Wicked at the Apollo Victoria Theatre and Kinky Boots at the Adelphi Theatre. Her other theatre credits include the UK tour of Wonderland, Murder Ballad at the Arts Theatre and Starlight Express at The Other Palace.

George Maguire is the winner for the Olivier Award for Best Supporting Actor in a Musical for his performance as Dave Davies in Sunny Afternoon. His other theatre credits include 35mm: A Musical Exhibition at The Other Palace Studio, Oliver! at the London Palladium and the European tour of Rent.

Cleve September is perhaps best known for his Olivier Nominated performance as Philip Hamilton/John Laurens in the original West End cast of Hamilton at the Victoria Palace Theatre. His other theatre credits include Jesus Chris Superstar at Regent's Park Open Air Theatre, Annie Get Your Gun at the Crucible Theatre, In The Heights at Kings Cross Theatre and The Last Days of Troy at The Globe Theatre.

Ako Mitchell is an actor and filmmaker whose recent theatre credits include playing Larry in Indecent Proposal at the Southwark Playhouse, Bob Baker in Wonderful Town at Opera Holland Park, Mister in The Color Purple at Curve and the Birmingham Rep and The Moon/The Bus in Caroline, Or Change at the Chichester Festival Theatre and The Playhouse Theatre in London's West End.

At the height of the Great Depression, Bonnie Parker and Clyde Barrow went from two small-town nobodies in West Texas to America's most renowned folk heroes and the Texas law enforcement's worst nightmares. Fearless, shameless, and alluring, Bonnie & Clyde is the electrifying story of love, adventure and crime that captured the attention of an entire country. The show features the songs Raise A Little Hell, This World Will Remember Me and Made In America.

When Bonnie and Clyde meet, their mutual cravings for excitement and fame, combined with a desperate need to lift themselves out of the endless banality and poverty of West Dallas, set them on a mission to chase their dreams. Their bold and reckless behaviour turns the young lovers' thrilling adventure into a downward spiral, putting themselves and their loved ones in trouble with the law. Forced to stay on the run, the lovers resort to robbery and murder to survive. As the infamous duo's fame grows bigger, their inevitable end draws nearer.

DLAP Group is an Olivier-Award winning production company with West End and UK Touring works including Bonnie and Clyde in Concert, Rock of Ages, Company, Fame, Curtains, and The Wedding Singer.