by Oliver Mitford on Friday 6 September 2013, 1:26 pm in Cast Changes and Announcements 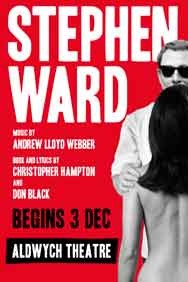 West End superstar Alexander Hanson will play the title role in Andrew Lloyd Webber's new musical Stephen Ward when it opens at the Aldwych Theatre on 3 December. He will be joined by Anthony Calf playing Lord Astor and Joanna Riding playing Valerie Hobson.

Alexander Hanson has played lead roles in Jesus Christ Superstar; The UK Arena Tour, A Little Night Music at the Menier Chocolate Factory then Garrick Theatre, Marguerite at the Theatre Royal Haymarket, The Sound of Music at the London Palladium and We Will Rock You at the Dominion Theatre. His film and television credits include Party Animals and Heartbeat.

Anthony Calf is currently appearing in the West End smash-hit of Noel Coward’s Private Lives at the Gielgud Theatre. His other theatre credits include My Fair Lady at Sheffield Theatre, Death and the Maiden at the Harold Pinter Theatre. His television credits include Restless and Upstairs Downstairs.

Joanna Riding was recently seen in Richard Eyre’s acclaimed production of The Pajama Game at the Chichester Festival Theatre. Her other theatre credits include Billy Elliot, the Musical at the Victoria Palace Theatre, Lend Me A Tenor at the Gielgud Theatre and Fear and Misery at the Royal Court Theatre.