Relatively Speaking opens and is already working its charms 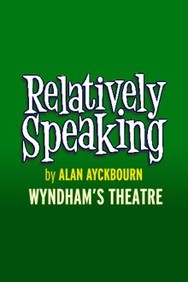 Witty, wonderful and all things English, Relatively Speaking was Alan Ayckbourn’s first big West End smash hit when it opened in 1967 at the Duke of York’s Theatre. Now it brings all its charm and hilarity to London’s Wyndham’s Theatre from 14 May until 31 August 2013. With a star cast comprised of Felicity Kendal, Jonathan Coy, Kara Tointon and Max Bennett and this revival coming from legendary director Lindsay Posner, you know you’ll be in good hands.

Relatively Speaking tells the story of Ginny and Greg, who are deeply in love and want to marry. But Ginny hasn’t split up with her old lover Philip yet and she’s yet to tell the new lover about the old one! Ginny sets off to Buckinghamshire under the pretence of spending the day with her parents, but really just to tell Phillip it’s over before Greg catches wind. Greg follows Ginny and, to her horror, arrives first – but quickly realises that Greg thinks Philip and his wife are her actual parents! As you can imagine, the rest is mirth and mistaken identity abandon, getting sillier and sillier still.

The entire cast of Relatively Speaking posses some amazing acting credentials. Teetering on the edge of becoming a national treasure, Felicity Kendal is perhaps loved most in the extremely popular BBC TV show The Good Life. Kendal first starred in an Alan Ayckbourn play back in 1973, for the West End premiere of The Norman Conquests. Jonathan Coy has had an illustrious carrier, mainly in television with credits that include Hornblower, Brideshead Revisited, Downton Abbey and Foyle's War. His most recent stage appearance was in the 2011 West End production of Much Ado About Nothing. Kara Tointon was recently on the West End stage in Pygmalion, with Rupert Everett, and Absent Friends. Max Bennett's West End credits include Posh, In Basildon, Luise Miller, Danton's Death and Waste.

Catch this most charming and delightful of plays that is sure to set your summer off to a great start. With a cast and director like that, you just can’t go wrong. Book your tickets fast, as word of mouth will make this one sell fast.