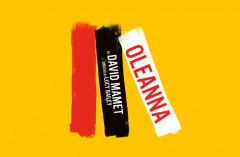 The production will star Rosie Sheehy as Carol and Jonathan Slinger as John, reprising their roles from its sell-out run at Theatre Royal Bath’s Ustinov Studio last December.

When Oleanna opened nearly thirty years ago, it caused uproar amongst audiences from New York to London. Set on an American campus, a seemingly innocuous conversation between a college professor and his female student warps into a nightmare which threatens to destroy them both, when she files a claim of sexual harassment against him. With its take on the corrosive excesses of political correctness and exploration of the use and abuse of language, this is the ultimate drama of pupil power and student revenge.

Addressing issues which are strikingly current, this will be a fascinating opportunity to see this landmark play from the perspective of our #MeToo era and Everyone’s Invited era.

Jonathan Slinger has worked extensively with the Royal Shakespeare Company including the roles of Macbeth, Prospero, Hamlet, Richard II and Richard III. He has also worked at the National Theatre and Shakespeare’s Globe and further theatre credits include Willy Wonka in Charlie and the Chocolate Factory (Theatre Royal Drury Lane) and Bernard Woolley in Yes, Prime Minister (Chichester and West End).

David Mamet is one of the most distinctive voices in stage and film writing today. His multi award-winning plays include Glengarry Glen Ross, Speed-the-Plow and American Buffalo.

Presented by Theatre Royal Bath Productions and Jonathan Church Productions, Oleanna by David Mamet is directed by Lucy Bailey, designed by Alex Eales, with lighting by Oliver Fenwick and sound by Jon Nicholls.