by Best of Theatre Staff on Friday 7 January 2022, 10:54 am in Cast Changes and Announcements 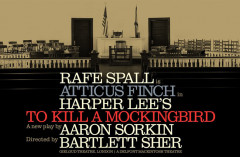 The production will open at the Gielgud Theatre on 31 March 2022, with previews from 10 March. This new play by Aaron Sorkin isbased on Harper Lee’s Pulitzer Prize-winning novel, and directed by Bartlett Sher.

Set in Maycomb, Alabama in 1934, To Kill a Mockingbird has provided American literature with some of its most indelible characters: lawyer Atticus Finch, the tragically wronged Tom Robinson, Atticus’ daughter Scout, her brother Jem, their housekeeper and caretaker Calpurnia and the reclusive Arthur “Boo” Radley. For the past six decades and for every generation, this story, its characters and portrait of small-town America have helped to, and continue to, inspire conversation and change.

Harper Lee’s enduring story of racial injustice and childhood innocence has sold more than 45 million copies of the novel worldwide. 2020 marked the 60th anniversary of its publication.

Before the Broadway shutdown in March 2020, To Kill a Mockingbird continuously played to standing-room-only houses. Since performances began on Thursday 1 November 2018, the production has not played to an empty seat, with capacity remaining over 100% for every performance. On February 26, 2020, the cast of To Kill a Mockingbird gave a history-making performance of the play at Madison Square Garden, for 18,000 New York City school children. This was the largest single performance of a theatrical work in the history of world theater. In 2019, to culminate National “Theatre in Our Schools” month, Aaron Sorkin, Bartlett Sher, and members of the Broadway cast took the play to Washington, D.C. for an unprecedented special presentation at the Library of Congress, in partnership with the Educational Theatre Association.

Pamela Nomvete plays Calpurnia. Her theatre credits include The Doctor (Almeida Theatre), The Convert (Young Vic), Meet Me At Dawn (Market Theatre Johannesburg), They Drink it in the Congo (Almeida Theatre), Teddy Ferrara (Donmar Warehouse), Belong, Truth and Reconciliation, Now or Later (Royal Court Theatre), The Comedy of Errors, Welcome to Thebes (National Theatre), Archbishop and the Antichrist (Synergy), Twelfth Night (RSC – Duke of York’s Theatre) and Nothing But the Truth (Market Theatre Johannesburg). Her television credits include Flesh and Blood, Noughts and Crosses, Gangs of London, Avenue 5, Wild Bill, In the Long Run 2, Motherland, Lockdown, and The Widow; and for film, The Forgiven, Kingmakers, Sometimes in April, Zulu Love Letter, and The Special Relationship.

Harry Redding makes his professional stage debut playing Jem Finch. Whilst training at LAMDA, his theatre credits include Kin, The Tempest, and The Rivals.

(Finborough Theatre) and Verdict (UK tour). Her television work includes The Outlaws, Holby City Silent Witness, Call the Midwife, and Wolfblood; and for film Mad to Be Normal, Waterboys, The Carrier, Always in the Present and Je Suis Daddy.

Paul Birchard’s theatre credit include The Pat Hobby Stories (Edinburgh Fringe Festival), Death of a Salesman (RSC), The White House Murder Case (Orange Tree Theatre), The Goat (Traverse, Edinburgh), Inherit The Wind (The Old Vic), His Girl Friday, Tales From The Vienna Woods, Johnny on a Spot, Sweet Bird Of Youth (National Theatre), The Graduate (Gielgud Theatre), and The Fishing Trip (Croydon Warehouse). For television, his work includes The Bureau, Berlin Station, The Flu That Killed 50 Million, A Very British Deterrent, Waterloo Road, Spooks, A Line in the Sand, Look Around You, Absolute Hell, Mrs. Pollifax and The New Statesman; and for film, L’Aventure Des Marguerite, Backdraft 2, Fantastic Beasts and Where to Find Them, The Angels’ Share, Hanna, The Dark Knight, 1408, U & Me & Tennessee – An American Romance, The White Countess, The Jacket, and Batman.

Academy-Award winning screenwriter, director, and renowned playwright Aaron Sorkin made his Broadway debut with A Few Good Men, for which he received the John Gassner Award as Outstanding New American Playwright. He followed this with the debut of Making Movies Off-Broadway; and later returned to Broadway with The Farnsworth Invention. Most recently, his 2018 staged adaptation of To Kill a Mockingbird, re-premièred on Broadway. In its original run, the show run garnered Celia Keenan-Bolger the Tony Award for Best Performance by an Actress in a Featured Role, as well as an additional eight nominations, including Jeff Daniels for Best Performance by an Actor in a Leading Role. For television, Sorkin created and produced NBC’s renowned series The West Wing, which earned nine Emmy nominations in its first season. The series went on to win a total of 26 Emmys, including Outstanding Drama Series for four consecutive years from 2000-2003. For his work on the series, Sorkin twice received the Peabody Award and Humanitas Prize, as well as three Television Critics Association Awards and Producers Guild Awards, and a Writers Guild Award. Sorkin’s other television work includes the Emmy-nominated Sports Night, Studio 60 on the Sunset Strip, and The Newsroom. Sorkin’s first feature film was the 1993 adaptation of his own play A Few Good Men – nominated for four Academy Awards including Best Picture. In 2011, Sorkin won the Academy Award, Critics’ Choice Award, BAFTA, and Writers Guild Award for Best Adapted Screenplay, as well as the USC Scripter Award for The Social Network. The film, directed by David Fincher, was nominated for a total of eight Academy Awards including Best Picture. His additional screenplays include The American President, Charlie Wilson’s War, Moneyball – adapted alongside Steve Zaillian with story by Stan Chervin, which received the Critics’ Choice Award and New York Film Critics’ Award for Best Adapted Screenplay - and Steve Jobs. In 2017, Sorkin made his directorial debut with Molly’s Game, which he also wrote based on the personal memoir of Molly Bloom. The screenplay earned him nominations for an Academy Award, Writers Guild Award, and BAFTA. Sorkin also wrote and directed The Trial of the Chicago 7, which was nominated for six Academy Awards, including Best Picture and Best Original Screenplay. Most recently he wrote and directed Being the Ricardos, now available worldwide on Amazon Prime Video. The film, about Lucille Ball and Desi Arnaz set during one production week of I Love Lucy was recently nominated for three Critics Choice Awards including Best Original Screenplay.