by Best of Theatre Staff on Tuesday 11 February 2020, 11:09 am in Cast Changes and Announcements 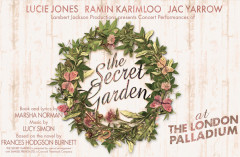 Based on the much-loved literary classic by Frances Hodgson Burnett, this heart-warming story is re-imagined in brilliant musical style by composer Lucy Simon (Doctor Zhivago) and the Pulitzer Prize-winning playwright Marsha Norman.

Young, orphaned Mary Lennox arrives at her uncle’s secluded country home to find a reclusive, long-suffering collection of souls — and the mysterious tale of a secret garden. Together with new-found friends, Mary breathes life into the secret garden. She blossoms too, and through her adventures, tends to all the hearts around her.

Bianca Baykara plays Alice. Her previous theatre credits include School Of Rock, (international tour), The Rocky Horror Show (Australian tour), In The Heights (Chapel off Chapel, Melbourne), West Side Story, Singin’ In The Rain (State Theatre, Melbourne), An Officer and A Gentleman (Sydney Lyric), and The King & I (Sydney Opera House).

Adam J Bernard plays Ben. His previous theatre credits include Dreamgirls (Savoy Theatre – for which he won the 2017 Olivier Award for Best Actor in a Supporting Role in a Musical), Hairspray (Asia tour), and I Can’t Sing – The X-Factor Musical (The London Palladium). His television credits include Gangs of London and Legends. For film, Backdraft 2 and 6 Rounds.

Lucy Drever is the Narrator. Her previous concert credits for Lambert Jackson Productions include Dr Zhivago (Cadogan Hall). As a workshop leader, presenter, and narrator, she has worked with Wigmore Hall, BBC Scottish Symphony Orchestra, Aurora Orchestra and the London Symphony Orchestra.

Celinde Schoenmaker plays Lily. Her previous concert credits for Lambert Jackson Productions include Dr Zhivago, and West End Women. Her other theatre credits include The Light in the Piazza (Royal Festival Hall, LA Opera), Barnum (Menier Chocolate Factory), The Phantom of the Opera (Her Majesty’s Theatre), Les Miserables (Queen’s Theatre). For film, her credits include Rocketman.

Jac Yarrow plays Dickon. His theatre credits include Joseph and the Amazing Technicolour Dreamcoat (The London Palladium – for which he won the 2019 The Stage Debut Award and was nominated for Best Actor in a Musical, and will reprise the role in 2020), and Rogers + Hammerstein’s Cinderella In Concert (Cadogan Hall).