The Commitments looks set to be a hot ticket! 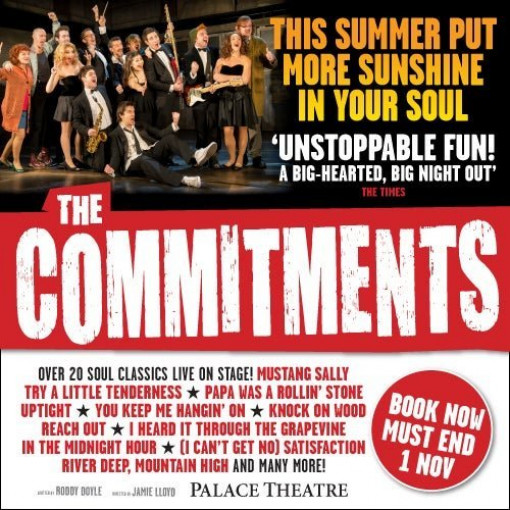 Creating a new musical from smash-hit films seems to be a winning formula on the West End at the moment, with the phenomenal success of The Bodyguard, Once and the anticipated arrival of From Here To Eternity. Now director Jamie Lloyd is bringing the Oscar-nominated film and cult novel The Commitments roaring to life on the stage of The Palace Theatre in September.

The inspirational and hilarious story of a 1980s Dublin soul band comprised of an unlikely combo of kids trying to hit the big time, but along the way finding salvation in their music, is set to make this power-packed musical an absolute must-see. Adapted by Man Booker Prize-winner Roddy Doyle from his own best-selling 1987 novel and 1991 Oscar-nominated movie, audiences can look forward to big laughs and a whole host of classic soul and Motown numbers, from the iconic Mustang Sally and Al Green’s Take me to the River to Otis Reading’s Try a Little Tenderness and many, many more…

After directing James McAvoy in Macbeth at The Trafalgar Studios to great acclaim, director Jamie Lloyd looks like the perfect choice to captain this soulful ship. His previous experience with musicals includes the Olivier-nominated Piaf at the Donmar Warehouse – which, following a sell-out run, transferred to the Vaudeville Theatre – and Passion (also at the Donmar), which won the Evening Standard Award for Best Musical. At just 33 years old – which is young for a director – this wunderkind has yet to lose steam. It will be exciting to see what his golden touch can bring to The Commitments.

Book now to experience the world premier of this soulful and exhilarating new musical. With a whole host of fresh young talent at the helm, you’d be a fool to miss it!