by Oliver Mitford on Saturday 9 November 2013, 9:21 am in Cast Changes and Announcements 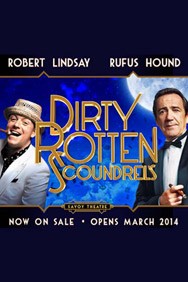 Award-winning television and stage actor Robert Lindsay is to take the star role in the musical version of Dirty Rotten Scoundrels, due to open at the Savoy Theatre on the 10 March 2014. Stand-up comic-turned-actor Rufus Hound and West End leading lady Katherine Kingsley will join Lindsay on stage in this musical helmed by legendary Broadway director and choreographer Jerry Mitchell.

Robert Lindsay is known for his varied roles on stage and screen. His musical theatre credits include Me and My Girl and Oliver!, and other stage credits include Becket, The Entertainer and The Lion in Winter. TV credits include more than a decade playing Ben Harper in sitcom My Family, Jericho and Falcon.

Comedian Rufus Hound made his stage debut in Utopia at the Soho Theatre earlier this year. He has since starred in One Man, Two Guvnors at the Theatre Royal Haymarket and on tour, and appeared in Neville's Island in Chichester.

They will be joined in the cast by Katherine Kingsley, who is currently playing Helena in Michael Grandage's production of Midsummer Night's Dream at the Noel Coward Theatre. Her other theatre credits include Singin' in the Rain (Chichester/West End), Relative Values (UK Tour) and Aspects of Love (Menier).

The musical is based on the hit comedy film starring Michael Caine and Steve Martin that tells the tall tale of two con men who compete to swindle a millionaire soap heiress on the French Reiviera. The production will run at the Savoy Theatre from 10 March 2014, following a national tour. It will follow the Beatles’ tribute show Let It Be, which is currently playing at the Savoy Theatre until 8 February 2014.