by Best of Theatre Staff on Wednesday 1 September 2021, 12:11 pm in Cast Changes and Announcements 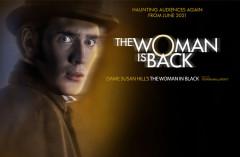 PW Productions are delighted to announce the full cast for the return of Susan Hill’s THE WOMAN IN BLACK at The Fortune Theatre, London. Terence Wilton and Max Hutchinson will return to the show from Tuesday 7 September as ‘Arthur Kipps’ and ‘The Actor’ respectively.

The producers are thrilled that in response to the show’s enduring popularity with young people, those aged 18 and under will be able to see the West End production free of charge, alongside each full paying adult ticket.

Having previously played the role of ‘Arthur Kipps’ at the Fortune Theatre in 2017 and at the start of 2020, Terence Wilton returns to the show this year. His other West End credits include “Never So Good” at the National Theatre, “Treatment” at the Donmar and “War Music” and “Antony and Cleopatra” at the Old Vic. Terence has also performed “The Taming of the Shrew” at the Royal Shakespeare Company among many other productions with the RSC in Stratford-upon-Avon, London and on tour. His television credits include BBC One’s “The Inspector Alleyn Mysteries” and “Doctor Who” and ITV’s “The Forsyte Saga”.

Returning to the role of ‘The Actor’, Max Hutchinson’s recent theatre credits also include “The 39 Steps” at the Barn Theatre and Theatre Royal Windsor, “The Hound of the Baskervilles” and “The Notorious Mrs Ebbsmith” at Jermyn Street Theatre, and the UK Tour of “Murder On The Nile”. He has also appeared in the films “Dream Horse” and “Downton Abbey”.

Stephen Mallatratt’s adaptation of Susan Hill’s best-selling novel tells the story of a lawyer obsessed with a curse that he believes has been cast over his family by the spectre of a ‘Woman in Black’. He engages a young actor to help him tell his story and exorcise the fear that grips his soul. It begins innocently enough, but as they delve further into his darkest memories, they find themselves caught up in a world of eerie marshes and moaning winds. The borders between make-believe and reality begin to blur and the flesh begins creep.