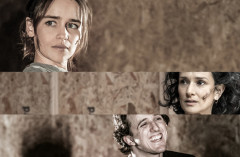 The company continues its commitment to accessibility, with 12,000 tickets priced at £15 available across The Seagull and the UK productions of Edmond Rostand’s Cyrano de Bergerac, freely adapted by Martin Crimp, directed by Jamie Lloyd, and starring James McAvoy.

For The Seagull, there will be specific performances throughout the run, where half the seats in the house are £15. These tickets are exclusively for under 30s, key workers and those receiving government benefits.

In addition, a dedicated outreach manager is distributing 5,000 free tickets amongst both secondary state schools and community organisations who otherwise would not have access to the theatre.