by Oliver Mitford on Wednesday 18 December 2013, 9:40 am in London Theatre Reviews 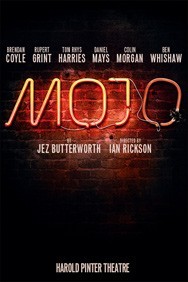 The West End gets its Mojo back, with this dynamic and dark revival.

Writer Jez Butterworth is now a household name, thanks to his play Jerusalem that enjoyed not one, but two sell-out runs in the West End and a hugely successful opening on Broadway last year. Mojo is Butterworth’s lesser-known play that premiered at the Royal Court back in 1995 under the direction of Ian Rickson, and now this revival sees Rickson back at the helm once again. Joining Rickson is his long-time collaborator, set designer Ultz, after their critically acclaimed collaboration on Jerusalem. This time around, the pairing has created a dark and disturbing world, filled with small-time Soho gangsters, that crackles with energy and violence.

Set 1958, the play tells the darkly funny story of a seedy Soho club run by small-time crooks. The Atlantic Club’s main attraction is Silver Johnny (Tom Rhys Harries), a new Elvis-style rock star. But after Johnny is kidnapped by rivals in south London and the Atlantic Club’s manager Ezra is brutally murdered, the remaining group of mobsters hole themselves out in the small back room of the club. Ready to fight to the death, the bewildered group starts to turn on each other, as friend becomes foe and secrets are revealed. The supposed companions now find themselves speeding without breaks to a tragic final conclusion.

The reason Mojo jumps off the stage in this production is due almost entirely to the performances from the hugely talented cast. Ben Whishaw’s Baby is delivered with a cold psychotic energy that sends shivers up the spines of the audience. Rupert Grint has well and truly shed the skin of Ron Weasley from the Harry Potter films and transformed into a slow-thinking bag of insecurities that induces laughs and tears in equal measure. West End regular Daniel Mays gives a confident performance as the jumpy sidekick that talks faster than he can think.

However, the stand-out performance of the night goes to Colin Morgan’s tightly-wound Skinny. Morgan pulls out the character’s tragic flaw slowly but ever so precisely, so that we see the full extent of his delusion and desire to please. It is the combination of these exemplary performances that raises Mojo above the title of ‘revival’ and into a new and brilliantly re-imagined production.

Ultz’s set design is suitably dark and dripping in seedy 80s’ décor. Charles Balfour’s lighting recreates the flickering neon colours of a sleazy Soho that takes the audience straight to the dark heart of the play. The lighting has also been cleverly incorporated into the physical set design, but the award for design should go to Stephen Warbeck’s music and Simon Baker’s sound design, as we are treated to an atmospheric and grimy rock-and-roll soundtrack laced with sinister undertones, and a gunshot that conjures up every brain-splattered movie sequence you can think of. Gross, but genius.

Butterworth’s script really shines in this production, as the plot twists and turns, leading us down dead ends and whipping us round again with one event after another in a downward spiral of manic energy. The dialogue zips along and is delivered by the cast with sniper-like precision.

Nothing has been left to chance in Rickson’s production, with the terror measured out in tantalising drips, building in intensity until bursting point. The audience really are kept on the edge of their seats and, combined with the large amount of four-letter words that are rattled out, it doesn’t make for the most relaxing of evenings, but it definitely makes up for it with bucket-loads of excitement and thrills.

Those familiar with the work of Quentin Tarantino will see the resemblance in the cocky machismo of the characters and wisecracking lines, but others may see hints of Harold Pinter and David Mamet threaded into the play. Well, good recipes are all about high-quality ingredients and Mojo has taken the prime cuts.

Jerusalem has gone down in history as one of the most acclaimed plays ever staged in the West End, so the pressure was on for Mojo to rival that success, but now the duo of Jez Butterworth and Ian Rickson might just have made lightning strike twice.

Mojo is booking at the Harold Pinter Theatre until 8 February 2014 and please note that due to the strong language, references to drugs and extreme violence, the show is not suitable for anyone under 16 years old.