by Best of Theatre Staff on Wednesday 23 March 2016, 10:39 am in Cast Changes and Announcements 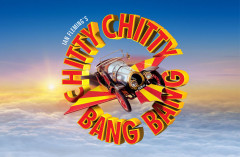 Music & Lyrics and West Yorkshire Playhouse are delighted to announce Matt Gillett in the role of The Childcatcher in the much-loved Sherman Brothers musical CHITTY CHITTY BANG BANG, which is touring across the UK and Ireland until February 2017. Matt was already a part of the ensemble when the producers discovered his talent for playing this iconic role.

John Stalker, Executive Producer of Music & Lyrics, said, “We are delighted to offer Matt this starring role having understudied the part of The Childcatcher since the beginning of the show in Leeds. Matt's performance will have everyone on the edge of their seats!” Martin Kemp, who currently plays The Childcatcher, leaves the production on 24 April 2016 and Matt will be taking over the role from 4 May in Milton Keynes.

CHITTY CHITTY BANG BANG has music and lyrics by Richard M Sherman and Robert B Sherman, who were also responsible for Mary Poppins, The Slipper and the Rose, The Aristocats and The Jungle Book. The Sherman Brothers have won two Academy Awards with a further nine nominations, two Grammy Awards and they have received 21 gold and platinum albums.

The film made from Ian Fleming’s classic story has been adapted for the stage by Jeremy Sams, based on the MGM Motion Picture Licensed Script adapted by Ray Roderick.

There are sensational sets and stunning special effects and, of course, the memorable score by the Sherman Brothers, which includes such standards as Truly Scrumptious, Toot Sweets, Hushabye Mountain and the Oscar-nominated title song Chitty Chitty Bang Bang.