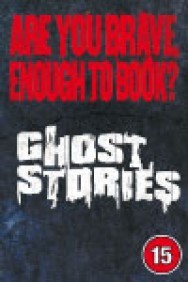 After terrifying audiences in the West End, Ghost Stories is set to return in the New Year; this time to the Arts Theatre.

Billed as a ‘terrifying theatrical event’, Ghost Stories broke box office records at the Lyric Hammersmith and the Liverpool Playhouse before going on the send chills up the spines of 130,000 people at the Duke of York’s Theatre. Now the production is set to return to the West End’s Arts Theatre from 27 February 2014, with previews from 13 February.

Created by award-winning writer and director duo Jeremy Dyson and Andy Nyman, Ghost Stories delivers exactly what it says on the tin. A series of spectral yarns are played out to the audience and narrated by Nyman himself. The show promises to provide jumps and frights galore, whilst also leaving you with a creeping sense of terror, long after the curtain goes down.

Andy Nyman is best known for his work with magician-cum-showman Derren Brown, having directed his show Svengali and, most recently, Infamous, which has just finished a sold-out West End run at The Palace Theatre.

Jeremy Dyson is co-writer of the dark and disturbing The League of Gentlemen.

Please be advised that Ghost Stories contains moments of extreme shock and tension. The show is unsuitable for anyone under the age of 16. We strongly advise those of a nervous disposition to think very seriously before attending.

Tickets went on sale 21 August, and seeing that the last time Ghost Stories was in the West End it sold out, it’s best to book early to avoid disappointment.