by Oliver Mitford on Wednesday 4 December 2013, 9:43 am in London Theatre Reviews 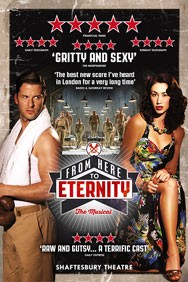 Gritty, full of energy and bursting with heart, From Here To Eternity sweeps audiences off their feet

The title ‘From Here to Eternity’ is quite a statement to make, especially with the track record of new musicals in London’s West End, most lasting just a couple of months. However, this bold title seems to match the boldness of Tamara Harvey’s slick production, brimming with confidence and integrity.

Based on James Jones’s 800-page novel of the same name, the story deals with life on an American army base on the island of Hawaii in 1941, where the island girls fight for the affections of the men of G Company against the backdrop of the infamous attack on Pearl Harbour.

Troubled new recruit Private Prewitt (Robert Lonsdale) arrives on the base and very quickly ruffles feathers after falling for the beautiful and charming escort girl Lorene (Siubhan Harrison). His commanding officer, Sergeant Milt Warden (Darius Campbell), has likewise fallen for a girl, but the object of his desire is none other than the captain’s wife, Karen (Rebecca Thornhill). Both men have made dangerous choices and, as war approaches, it becomes more perilous than any of them could have imagined.

This new musical comes from lyricist Tim Rice, the man who gave us The Lion King, Jesus Christ Superstar, Evita and countless other magnificent musicals. Joining Rice is newcomer to the West End, composer Stuart Brayson and Bill Oakes as scriptwriter. Not since the heyday of Andrew Lloyd Webber has a new score been this exciting. Brayson uses a variety of musical styles to evoke each element of the show’s world, such as Hawaiian hula motifs mixed with sexy jazz for the escort club, bluesy chords for the male solos and military brass and chorales for the men of G Company.

This inventive amalgamation of musical styles makes for thrilling listening, but it is the meaningful rhyming flair of Tim Rice’s lyrics that raises the bar on this production. In From Here To Eternity, the music and lyrics beautifully complement each other to capture the feeling of the 1940s and tell the epic story consumately. It is when this powerful pairing is in tune with each other, that musical theatre can truly transcend the entertaining and become captivating.

In From Here To Eternity, the music and lyrics beautifully complement each other to capture the feeling of the 1940s and tell the epic story consumately. It is when this powerful pairing is in tune with each other, that musical theatre can truly transcend the entertaining and become captivating.

The show is delivered with some significant skill by the cast and creative team. From Here To Eternity is director Tamara Harvey’s first foray into the cut-throat world of West End musicals and, boy, what an entrance! Harvey has made clever use of the stage space, as scenes flow in and out of each other with seeming ease and grace. Her background in plays and new writing has helped to give a decidedly gritty atmosphere to the production that’s full of truth and integrity. Nothing is hammed up or cartoonish; it is real and very believable.

Soutra Gilmour’s design is similarly coarse, with huge dilapidated arches of an abandoned theatre setting the scene for the action to be played out on. This minimal design approach has cleverly given room for choreographer Javier de Frutos to fill the space with military drill routines and dreamlike physical theatre sequences, but it is the final eight to ten minutes where De Frutos really gets to shine. He creates the raid on Pearl Harbour, complete with exploding bombs and men mown down by aeroplane machine guns, in the most spectacular feat of choreography. The cast move from real time to slow motion à la bullet time in The Matrix. It is terrifyingly real, truly dramatic and a brilliant climatic moment.

As can be seen, a lot has been asked of the company, but they rise to the challenge with gusto. The physical moments are executed with apt military precision and the principal cast members take to the limelight with a bold tenacity. Siubhan Harrison gives the character of Lorene a feisty intensity; Ryan Sampson is cheekily opportunistic as everyman Private Maggio; Robert Lonsdale is rugged and withdrawn as leading man Private Prewitt and Rebecca Thornhill breaks hearts as the captain’s wife.

Throughout From Here To Eternity there are little nods to the iconic Oscar-winning 1953 Fred Zinnemann film version that starred Burt Lancaster, Deborah Kerr, Montgomery Clift, Donna Reed and Frank Sinatra. The most memorable being the semi-naked kiss on the beach between Karen and Sergeant Warden, as the waves crash onto the shore, beautifully recreated here by John Driscoll’s evocative projection design. The question is whether audiences will take the musical to their hearts to the same extent as they did with the movie. Only time will tell.

From Here To Eternity tickets

From Here To Eternity is booking at the Shaftesbury Theatre until 26 April 2014.