by Best of Theatre Staff on Thursday 18 November 2021, 3:33 pm in Cast Changes and Announcements 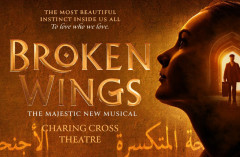 New York City, 1923. Through exquisite poetry and enchanting music, an ageing Gibran narrates our tale, transporting us back two decades and across continents, to turn-of-the-century Beirut. Gibran meets Selma; their connection is instant and their love affair, fated. However, their journey to happiness is soon thrown off course, as the pair face obstacles that shake the delicate foundation of their partnership. Will their love win out or will their dream of a life together be torn apart?

Performed in-the-round, Broken Wings takes us on an unmissable musical voyage, exploring issues of gender equality, immigration, the freedom to love who we love, and what 'home' really means to us. Over a century later, and the themes and debates raised in Gibran's story, remain increasingly relevant today.

Nadim Naaman is the book writer and co-composer, and is also playing Kahlil. His credits include Rumi: The Musical - released by Broadway Records as a Concept Album. His credits as an actor include A Little Night Music (Holland Park Opera), The Phantom of the Opera (Her Majesty's Theatre/Greek tour), By Jeeves (The Old Laundry), Sweeney Todd (Tooting Arts Club), One Man, Two Guvnors (Theatre Royal Haymarket), and The Sound of Music (London Palladium). As a soloist, he has performed concerts in venues including The Hong Kong Philharmonic, Birmingham Symphony, Concertgebouw Amsterdam, RTE Concert Orchestra Dublin, Liverpool Philharmonic, The John Wilson Orchestra, London Symphony and BBC Proms at The Royal Albert Hall. His 2016 studio album, Sides, topped the iTunes UK Vocal Chart, and is available on iTunes and Spotify. Naaman is also an associate at The Royal Academy of Music.

Dana Al Fardan is a Qatari composer, songwriter and symphonic artist. Her credits include Rumi: The Musical - released by Broadway Records as a Concept Album. She is the official composer of Qatar Airways and also Brand Ambassador of Qatar Philharmonic Orchestra, with whom she has recorded two albums: Layla and Sandstorm – the latter has been performed by The London Metropolitan Orchestra at Theatre Royal Haymarket in London.

Yasmeen Audi plays Layla Bawab/Ensemble. She recently graduated from the Royal Academy of Music in London, where she won the 2019 Toni V. Fell Prize for Acting through Song. She made her West End debut playing the legendary in Umm Kulthum & The Golden Era (London Palladium). Her other work includes Broadway's Gypsy of the Year (assistant choreographer/swing), RENT, Little Shop of Horrors and Into the Woods.

Alex Kais is making his London stage debut in the Ensemble. He recently appeared in The Hades & Persephone Project and partnered with Trinacria Theatre Company to develop the production. He is currently part of the team that are producing the 2021 Black British Theatre Awards.

Ayesha Patel makes her professional stage debut playing Dima Bawab. She recently graduated from Mountview Academy of Theatre Arts. Her television work include as part of the choir in Ball & Boe: A Very Merry Christmas.