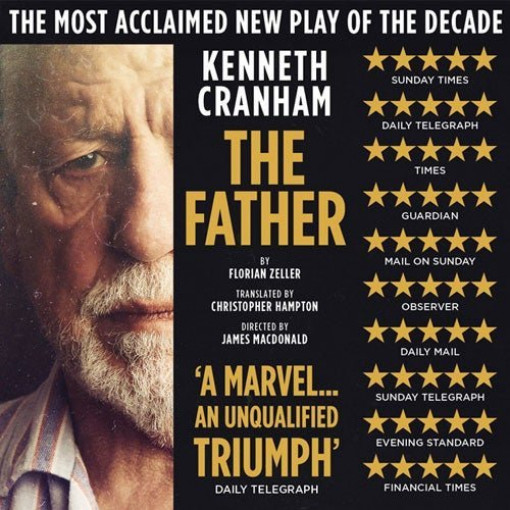 What's the story? Andre was once a tap dancer. Now he's eighty years old, living with his daughter Anne and her husband Antoine. Or is he? Perhaps he was actually an engineer in his youth, and now he's a man whose daughter Anne lives with her new lover Pierre, in London?

He can't actually remember. All he knows is he can't seem to find his watch and, for some odd reason, he's wearing his pyjamas in daytime. Is he losing the plot?

Crisply translated with wit, sensitivity and wisdom by Christopher Hampton, it has already raised the roof at the Theatre Royal Bath and Tricycle Theatre, leaving delighted critics and audiences in its wake. And it has gathered a fine stable of eight five star reviews from the critics at major national newspapers... so far. We're fully expecting more.

Kenneth Cranham, Tony and Olivier nominee, is back on stage doing his remarkable thing in theatreland, but only for sixty one performances. So catch it while you can.

Here's what the papers say. The Mail on Sunday hails it as "My play – and production - of the year. Devastating drama". The Times says The Father is “a revelation, as sharp and surprising a play as you'll see all year". The Daily Mail calls the acting “masterly", The Evening Standard describes it as “Florian Zeller's stunning play". And The Independent waxes lyrical, saying it's “brilliant... makes your brain hum with the unique potential of theatre.”

The play is beautifully directed by James McDonald. Scenic design comes from Miriam Buether, lighting by Guy Hoare and the sound is arranged by Christopher Shutt.

The Father tickets – Experience a theatrical legend in the making

If you’d like to buy The Father cheap tickets we offer the full range of seating types, from low cost to top of the range, all with really good availability.