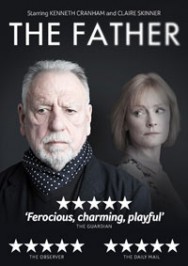 It’s great news the Theatre Royal Bath’s production of The Father, starring Kenneth Cranham, will transfer to the Wyndham’s Theatre from September 30 to November 21 after a successful run at the Tricycle Theatre.

Like many people I’d assumed that this was to be a revival of Strindberg’s deeply weird expressionistic classic of the same name, from the Nineteenth Century. In fact it’s the British premiere of a contemporary French play about Alzheimer's, translated by Christopher Hampton. It’s by Florian Zeller, directed by James Macdonald, with a set design by Miriam Buether, lighting design by Guy Hoare and sound design by Christopher Shutt.

Most importantly Cranham is apparently on top form playing 80 year-old André, a retired engineer. He’s possibly a former tap-dancer too although this, the location and how he’s linked to other characters remains vague, presumably to reflect his deteriorating mind.

The reviews in Bath and at The Tricycle were fantastic and apparently it’s all as powerful and intense as King Lear. Quite a recommendation!

Kenneth Cranham is one of my favourite actors. He’s always an intriguing mix of craggy yet caring, delivering scene stealing moments with great subtlety. I can’t wait to see him in what critic Michael Coveney describes as “The performance of his life”

I remember him best for his Olivier nominated performance as the sinister Inspector Goole in An Inspector Calls at the National Theatre, chipping away at the other characters to reveal the ugly truth behind their respectable façades. His screen career includes notable performances in Layer Cake, Gangster No. 1, Rome, and Oliver! He is probably best known to horror genre fans as the deranged Dr. Philip Channard in Hellraiser II. His Broadway and West End appearances also include lead roles in Joe Orton’s dark comedies Entertaining Mr Sloane and Loot. He was terrific a few years ago in a revival of the thriller Gaslight at the Old Vic when, once again, he played a charming character with a sinister edge.

Before the production transfers to the West End it will play a short run at the Cambridge Arts Theatre from September 15 to 26.

Further casting is yet to be announced.