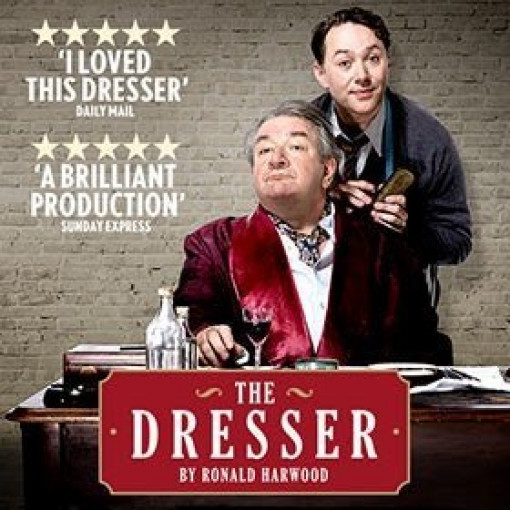 The playwright Ronald Harwood weaves the fascinating tale of an ageing actor's personal assistant, who struggles to keep his boss's life under control and the show on the road. The excellent Reece Shearsmith is at the helm as Norman, the dresser, starring next to the wonderful Ken Stott as 'Sir' in a new production of Harwood's play, this time directed by Sean Foley.

In 1983 the play was made into an award-winning film with Albert Finney and Tom Courtenay at the helm, based on Harwood's screenplay, directed by Peter Yates and produced by Yates and Harwood. The stars of the show were joined by Zena Walker, Eileen Atkins, Michael Gough and Edward Fox, and it was an instant success. Finney and Courtenay won Academy Award, BAFTA Award and Golden Globe Award nominations for the movie, and Tom Courtenay won a Golden Globe for Best Actor - Motion Picture Drama.

The piece has its roots in a true story, the playwright's bizarre experiences as the theatre dresser to the English Shakespearean actor-manager Sir Donald Wolfit, who inspired the character known as 'Sir'.

The play premièred at the Royal Exchange Theatre, Manchester, in 1980 then transferred to the Queen's Theatre later that year. Freddie Jones starred as 'Sir' and Tom Courtenay as Norman, and the production was nominated for Best Play by the Society of West End Theatre Awards, now the Oliviers. On Broadway by late '81, again complete with Tom Courtenay and Paul Rogers, it was nominated for a couple of Tony Awards and a Drama Desk Award for Outstanding Actor in a Play.

Most recently, it has been revived on BBC TV starring Anthony Hopkins and Ian McKellen, with McKellen nominated for a Bafta for his role as Norman. Now it's due back in London for the first time in ten years, and the buzz is already mounting.

It's fair to say The Dresser is one of Britain's best loved productions. It's also fair to say that it's difficult to pin down exactly why it's always such a hit. Even the playwright confesses he's “continually puzzled by its popularity”. But people absolutely love it, and it never fails to delight.

The Dresser tickets – Your chance to witness a real theatre classic

If you’d like to buy The Dresser cheap tickets we sell every type of ticket, from bargain to top of the range, all with excellent availability.