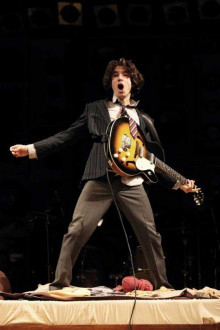 This is the story of the Kinks' supremely talented singer-songwriter Ray Davies, his brother Dave and the band, whose extraordinary tale is told through their best-loved chart masterpieces. The music and lyrics, all by Davies, are supported by a best-selling book by Joe Penhall. The show is directed by Edward Hall and designed to perfection by Miriam Buether. Sunny Afternoon takes an intimate look at what happens when ordinary people are shot to stardom. The Kinks were famously volatile, so you can expect a deliciously rocky ride as well as music to die for. The backdrop is the infamous British cultural epoch that occurred between the ultra-conservative, traditional 1950s and the swinging '60s. And the musical captures the massive highs and equally dramatic lows of the band as they deliver killer performances to delighted fans.

What's the story? It's 30th July 1966, the year we won the World Cup. In Wembley Stadium, a hundred thousand England fans are roaring out the Kinks' number one chart hit 'Sunny Afternoon'. How come the band ended up becoming such a powerful icon of Britishness, the very face of British pop music? And how did they end up being banned in America at the height of their success over there?

You'll discover the fascinating answers to this and many more questions about the band Britain never forgot. The battles of the brothers Ray and Dave Davies, the involvement of Pete Quaife and Mick Avory... the end result is a highly acclaimed and genuinely exhilarating show that's tipped to draw enormous crowds.

Expect a non-stop flow of legendary tunes including You Really Got Me, All Day And All Of The Night, Waterloo Sunset and more, all top class stuff. Kinks fans will love it, as will younger music lovers who haven't come across them yet. The story at the core of the show is satisfyingly dramatic, perfect for anyone who appreciates the best of British pop and ideal for nostalgia-seekers.

John Dagleish plays Ray Davies, whose movie successes include The Monuments Men, Snow in Paradise and Age of Heroes as well as telly hits with Lark Rise to Candleford, Beaver Falls and Starlings. George Maguire plays Dave Davies, with a masterful theatre career behind him as well as films like Spiderhole, Terror and Utopia. Adam Sopp plays Mick Avory and Ned Derrington plays Pete Quaife.

If you’d like to secure Sunny Afternoon cheap tickets, we offer the full range of seating types, from low cost to premium, all with excellent availability.

Recommended for 12+ due to strong language.

Children under 5 years and babes in arms will strictly not be admitted.