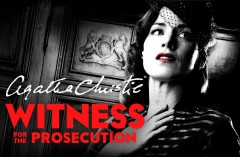 The reopening of Agatha Christie’s Witness for the Prosecution at London County Hall has been delayed until 14 September 2021. The production was due to reopen on 3 August.

"We are absolutely gutted that we have to delay the re-opening of Agatha Christie's ‘Witness for the Prosecution’ at London County Hall until 14 September.

Unfortunately, the combined effects of continued uncertainty around a return to full capacity in theatres, no provision of cancellation insurance, and the delayed delivery of our promised Cultural Recovery Fund grant are such that we cannot afford to proceed with the rehearsals as planned. We have not taken this decision lightly. It leaves 51 people waiting to resume their jobs. For us as Producers the cost of remaining closed is significant and will increase as furlough and business rates relief are reduced from July.

We are sorry for our wonderful and loyal audience who stood ready to support our return in August. We urge you, please re-book into the new dates from 14th September and come and celebrate with us as soon as we are able to declare ’THE COURT IS NOW (RE)OPEN’."

Since opening to critical acclaim in 2017 Witness for the Prosecution has captured the imagination of thousands who have been gripped by the case of Leonard Vole, accused of murder in cold blood. Director Lucy Bailey, whose current projects include Oleanna, (currently touring the UK and soon to open in the West End) and the upcoming production of Agatha Christie’s And Then There Were None (Royal and Derngate/ UK tour), thrillingly places the audience in the thick of the action, as Agatha Christie’s enthralling tale of justice, passion and betrayal unfolds around them.

The twists and turns of the case are played out in a spectacular courtroom setting inside the iconic London County Hall as prosecution battles defence and witnesses take the stand to give their shocking testimonies. The production received Best Revival nominations at the 2018 Olivier and WhatsOnStage Awards.

Witness for the Prosecution is booking through to 20 March 2022. Casting is to be announced soon.

Witness for the Prosecution is designed by William Dudley, with lighting by Chris Davey, sound design by Mic Pool and casting by Ellie Collyer-Bristow CDG.