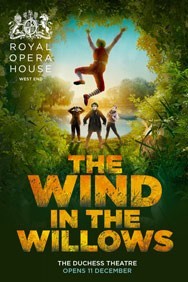 Stunning choreography and theatrical flair brings this children’s classic to life at the Duchess Theatre.

Back in 2002, choreographer Will Tuckett took on Kenneth Grahame’s children’s classic and turned it into a dance spectacular that wowed audiences at the Royal Opera House’s Linbury Studio. Now, the critically acclaimed production of Wind in the Willows returns, this time to the Duchess Theatre in the heart of the West End.

This decision to revive the show out of the intimate setting of its original venue was quite a gamble, as it risked losing its simple and down-to-earth charm for the effects and spectacle of a West End stage. However, they couldn’t have chosen a more fitting venue for the show than the Duchess Theatre. Its smaller stage and shabby art deco décor looks as though it’s all part of the overall design of the production.

This quintessentially English story revolves around the infamous Toad of Toad Hall and his loyal but long-suffering friends: river-dweller Ratty, wise but grumpy Badger and the bespectacled figure of kindness – Moley. After an attack of mania, Toad steals a motorcar and is caught red-handed by the law. Now incarcerated, Toad’s large stately home of Toad Hall is free for the taking and the evil weasels of the wild wood pounce at the chance to make it their new home. Toad manages to escape his prison with the help of the jailer’s daughter and makes his way back to his friends, just in time to join them and fellow riverbank inhabitance in kicking the weasels out of Toad Hall for good.

The Wind and the Willows is certain to delight audience of all ages with its imaginative and energetic staging that only heightens the true brilliance of Kenneth Grahame’s timeless story of friendship, fun and nostalgia

This dance theatre version of Wind in the Willows cleverly sets the action of the riverbank and the fates of Ratty, Moley, Badger and Toad cleverly within the metaphorical attic of writer Kenneth Grahame’s imagination. We are shown an enchanting world where any old piece of discarded furniture or dust-covered fabric can become, in the skilled hands of the performers, a sinister wild wood, an idyllic riverbank or even the grand estate of Toad Hall.

Knitting the story together is the figure of the narrator: a charming mixture of compassion, nostalgia and twinkly-eyed mischief, winningly played by Tony Robinson, who is making his debut with the show. Robinson creates intrigue and excitement with his delivery of Andrew Motion’s often dense text that explores the politics behind the quaint children’s tale. This depth to the production gives something for the adults to sink their teeth into while, at the same time, never dwelling on it long enough that it become dull for the younger audience members – a hard-to-achieve juggling act that Robinson traverses with lyrical dexterity and glee.

On the dancing front, the spotlight is firmly pointed at Will Kemp, Clemmie Sveaas and Chris Penfold. All three are hugely charismatic performers who throw themselves headfirst into their roles. Kemp bring a stately glamour to the curious and enigmatic Ratty. Sveaas takes the modern choreography and gives it a classic ballet flourish, while transforming into a nervous and jumpy Moley when the occasion calls for it. Penfold gives Toad a suitably grotesque manner complete with a delightfully stupid air that will keep adults and children entertained in equal measure.

The rest of the supporting cast transform into an array of characters, cleverly switching from frisky rabbits to teddy-boy weasels at the drop of a hat. Other characters such as the judge and the stoats are brought to life using an ingenious mix of props and puppetry that blur the line between reality and the downright surreal.

Martin Ward’s playful score underpins much of the stage action and, at times, is given centre-stage due to some excellent live singing by the company. The orchestra is occasionally a tad quiet, but this often adds to the elegance of the story and enhances the polished and classy tone of the production.

This is the first time that the Royal Opera House has taken one of their shows into the commercial theatre world of London’s West End. It looks as if they want a slice of the cake that the National Theatre and the Royal Shakespeare Company are currently enjoying with their transfers of War Horse, The Curious Incident of the Dog in the Night Time and Matilda. Well, why not? There is certainly enough cake to go around!

The Wind in the Willows is certain to delight audience of all ages with its imaginative and energetic staging that only heightens the true brilliance of Kenneth Grahame’s timeless story of friendship, fun and nostalgia.

The Wind in The Willows