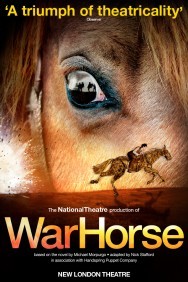 The now hugely famous horse puppet made its stage debut at the New London Theatre on 28 March 2008 and has completed over 1,640 performances, during that time it was operated by over 20 puppeteers. Joey will now stand on display for all to enjoy at the V&A’s Theatre and Performance Galleries in a specially created display showing how the life-size puppet is operated on stage. Alongside Joey there will also be costumes and illustrations by Olivier award-winning theatre designer Rae Smith, the visionary behind the original production of War Horse and interactive behind-the-scenes video displays.

Handspring Puppet Company take eight months to build a complete set of puppets for War Horse, all of which are handmade in Cape Town, South Africa by 14 craftsmen and women.

War Horse is currently playing to sell-out houses at The New London Theatre in the West End. The dramatic production tells the story of a young boy Albert, and his beloved horse Joey, who has been requisitioned by the army to fight in World War I. Caught in enemy crossfire, Joey ends up serving on both sides during the war before landing in No Man’s Land, while Albert, not old enough to enlist, embarks on a treacherous mission to find his horse and bring him home.

Now seem by over 4 million people worldwide, War Horse is still one of London’s hottest ticket!