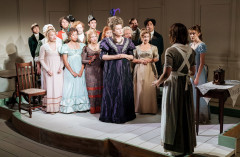 Following sold-out runs at both Chichester Festival Theatre and the Menier Chocolate Factory, Laura Wade’s The Watsons transfers to the West End in 2020. The production opens at the Harold Pinter Theatre on 19 May, with previews from 8 May, and runs until 26 September. Public booking opens on 15 November, priority booking is open now.

Directed by Samuel West, The Watsons played to critical acclaim at Chichester Festival Theatre in 2018, and completes its run at the Menier this Saturday, 16 November.

“Excellent. Jane Austen has never been quite so much fun.” The Times

Nineteen and new in town, Emma Watson’s been cut off by her wealthy aunt. She needs to marry, and fast, or be faced with a life of poverty and spinsterhood stuck in her humdrum family home.

Luckily, she has plenty of prospective suitors asking to dance, from dashing socialite Tom Musgrave to the stinking rich, socially awkward Lord Osborne. Which partner to pick?

So far, so familiar, but that’s when Jane Austen stopped writing. Two hundred years on, her forgotten heroine’s happy ending still hangs in the balance.

Picking up an unfinished novel, Olivier Award-winner Laura Wade’s ‘ingenious and triumphant’ (Evening Standard) new comedy pops the bonnet on Jane Austen’s worldand asks: what happens when a writer loses the plot and fictional characters take control of their tale?

Samuel West directs. His directorial work includes After Electra (Tricycle Theatre), Close The Coalhouse Door (Northern Stage), Waste (Almeida Theatre) and Dealer's Choice (Menier Chocolate Factory/Trafalgar Studios). As Artistic Director of Sheffield Theatres he directed the first revival of The Romans in Britain by Howard Brenton, and As You Like It for the RSC's Complete Works Festival. He also directed Money by Edward Bulwer-Lytton for BBC Radio. As an actor, work includes the title roles in Hamlet and Richard II for the RSC, Jeffrey Skilling in Lucy Prebble's Enron (Chichester/Royal Court/Noel Coward theatres), three series of Mr Selfridge, the film Howards End, Jonathan Strange and Mr Norrell, Suffragette and On Chesil Beach. He is currently filming All Creatures Great and Small.

This production is based on the original Chichester Festival Theatre production which had its world premiere at the Minerva Theatre on 3 November 2018.