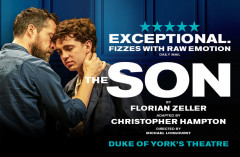 Following a critically acclaimed sell out run at Kiln Theatre, Michael Longhurst’s production of Florian Zeller’s The Son, in a translation by Christopher Hampton, transfers to the West End. The production opens at the Duke of York’s Theatre on 2 September, with previews from 24 August, and runs until 2 November. Amanda Abbington, Laurie Kynaston,John Light and Amaka Okafor reprise their lauded performances for the strictly limited 10 week run. The Son marks the first West End transfer for the Kiln Theatre since it reopened last September, and is presented in the West End by Fiery Angel and Gavin Kalin Productions.

Written by the internationally acclaimed Florian Zeller, lauded by The Guardian as ‘the most exciting playwright of our time’, The Son is directed by the award-winning Michael Longhurst and forms the final part of the critically acclaimed trilogy with The Father and The Mother.

I’m telling you. I don’t understand what’s happening to me.

Nicolas is going through a difficult phase after his parents’ divorce. He’s listless, skipping school, lying and thinks that moving in with his father and his new family may help. A fresh start. When he doesn’t settle there either, he decides that going back to his mother’s may be the answer. When change feels like the only way to survive, what will he do when the options begin to run out?

Florian Zeller is a French novelist and playwright. Zeller won the prestigious Prix Interallié in 2004 (Fascination of Evil) and several Molière Awards for his plays La Mère(The mother)and Le Père(The father). L'Autre, le Manège, Si tu mourais, Elle t'attend, La Vérité(The truth)andUne heure de Tranquillité were successfully produced in France and internationally.L’Envers du décor, starring Daniel Auteuil was produced in Paris in 2016. Avant de s'envoler was on the same season, and recently played at the Wyndham’s Theatre (The Height of the Storm) with Jonathan Pryce and Eileen Atkins (Olivier Award nomination for Best Actress) directed by Jonathan Kent. Le Père(The father), was nominated as Best New Play at the 2016 Olivier Awards, with Kenneth Cranham winning for Best Actor in a Play. It also received two nominations for the 2016 Tony Awards - Best Play and Best Performance by an Actor, the latter was won by Frank Langella. This play has been performed in over 35 countries and is being adapted into a feature film with Anthony Hopkins and Olivia Colman which Zeller will direct. Christopher Hampton has translated most of Zeller’s plays into English; and his plays have received many international awards.

Christopher Hampton has translated plays by Ibsen, Molière, Chekhov, Yasmina Reza (including Art and Life x 3) and Florian Zeller’s The Father, The Mother and The Truth. He won an Academy Award for Best Adapted Screenplay for the adaptation of his own play, Les Liaisons Dangereuses (released as Dangerous Liaisons). He was nominated again in 2007 for adapting Ian McEwan’s novel Atonement. His television work includes adaptations of The History Man and Hotel du Lac.

Laurie Kynaston plays Nicolas. His theatre credits include The Ferryman (Gielgud Theatre), Jumpy, The Winslow Boy (Theatre Clwyd). For television, his work includes Derry Girls, The Feed, Cradle to Grave, Murder Games and Our World War; and for film, How To Build a Girl, Undercliffe and England is Mine.

Michael Longhurst directs. He was recently appointed Artistic Director of the Donmar Warehouse, and opens his inaugural production there – David Greig’s Europe – on 20 June. His recent credits include the recent revival of Caroline or Change (Chichester, Festival Theatre, Hampstead Theatre, and Playhouse Theatre – nominated for 3 Olivier Awards, including Best Musical Revival, with Sharon D. Clarke winning the Best Actress in a Musical Award), and Peter Shaffer's Amadeus (National Theatre) and Nick Payne's Constellations starring Sally Hawkins and Rafe Spall at Royal Court Theatre and in the West End, and with Ruth Wilson and Jake Gyllenhaal on Broadway. Longhurst also worked with Gyllenhaal on his American stage debut in If There Is I Haven't Found It Yet (Roundabout Theatre, New York). Other credits include Gloria (Hampstead Theatre), Belleville (Donmar Warehouse), Bad Jews (Theatre Royal Bath/West End), and Linda (Royal Court Theatre).

Based in Kilburn, Kiln Theatre creates internationally renowned, high-quality, engaging and innovative work which presents the world through a variety of different lenses, amplifying unheard voices into the mainstream. Led by Artistic Director Indhu Rubasingham and Executive Director Daisy Heath, it makes theatre that crosses continents and tells big stories about human connections across cultures, race and languages.

We encourage artists of all ages and backgrounds. Our work is commissioned specifically for our theatre and produced by Kiln Theatre’s artistic team, as well as additional work which is programmed in collaboration with national or international partners.

Recent productions include White Teeth by Zadie Smith, adapted by Stephen Sharkey, Holy Sh!t by Alexis Zegerman, Approaching Empty by Ishy Din, The Son by Florian Zeller and The Half God of Rainfall by Inua Ellams. Recent collaborations include the National Theatre, Tamasha and Sundance Theatre Lab (US).

The ambitious Creative Learning programme aims to champion the imagination, aspiration and potential of the Brent community young and old. It invests in creating meaningful relationships with young people to inspire and encourage their creativity, their confidence and self-esteem. It works with older people to create a thriving community around the theatre.