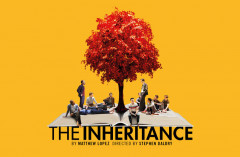 The Inheritance will finish its sold out run at the Young Vic Theatre on Saturday 19th May, where it opened to huge acclaim. Critics recognised Matthew Lopez’s play as a modern classic, and one of the most important plays for many years.

A generation after the peak of the AIDs crisis, what is it like to be a young gay man in New York? How many words are there now for pain and for love? Matthew Lopez’s major new two-part play explores profound themes through the turbulent and often hilarious experiences of a group of young, ambitious New Yorkers. What is the legacy left to them by previous generations? What do they owe the future and each other?

Playing across two parts, which can be seen either in one day or across two evenings, Matthew Lopez’s epic new play is directed by Stephen Daldry with set and costumes by Bob Crowley, lighting by Jon Clark, sound by Paul Arditti & Chris Reid, music by Paul Englishby, UK Casting by Julia Horan CDG and US Casting by Jordan Thaler CSA & Heidi Griffiths CSA.

David Lan, who programmed the original production as Artistic Director of the Young Vic, joins as Executive Producer for the West End production.

Andrew Burnap, John Benjamin Hickey and Samuel H. Levine are appearing with the permission of UK Equity, incorporating the Variety Artistes’ Federation, pursuant to an exchange programme between American Equity and UK Equity.