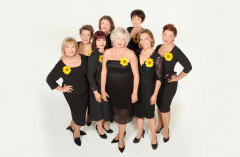 Gary Barlow and Tim Firth’s new British musical, THE GIRLS, based on the true story, the film and the award-winning play by Tim Firth, Calendar Girls, will open in London’s West End at the Phoenix Theatre, with performances from 28 January 2017. Tickets are on sale from 12.00noon today, Friday 16 September 2016. The West End premiere follows sold-out runs at the Grand Theatre Leeds and the Lowry Salford late 2015/early 2016. In the West End, the producers have made a commitment to there being no ‘premium-rated’ seats, no booking fees and reduced price previews.

The ‘Girls’ will be played by Debbie Chazen as Ruth, Sophie-Louise Dann as Celia, Michele Dotrice as Jessie, Claire Machin as Cora, Claire Moore as Chris and Joanna Riding as Annie. Also in the cast will be Joe Caffrey as Rod, Jeremy Clyde as Denis, John Davitt as Doctor, Soo Drouet as Brenda, James Gaddas as John, Jenny Gayner as Miss Wilson (coffee), Steve Giles as Lawrence, Maxwell Hutcheon as Colin, Shirley Jameson as Miss Wilson (tea), Marian McLoughlin as Marie, Judith Street as Lady Cravenshire and Jane Lambert, Rebecca Lewis, Victoria Blackburn and Frazer Hadfield, and introducing Josh Benson as Tommo, Ben Hunter as Danny and Chloe May Jackson as Jenny.

Debbie Chazen played Ethel Kingsley in Mike Leigh’s film Topsy-Turvy and her many television credits include the lead roles of Annie in Smoking Room and Kelly-Su Crabtree in Psychoville. Sophie-Louise Dann’s West End credits include Bend It Like Beckham, Made in Dagenham, Lend me a Tenor, for which she received an Olivier Award nomination, and Forbidden Broadway. Michele Dotrice is perhaps best known for her role as Betty opposite Michael Crawford in the BBC's highly successful series, Some Mothers Do 'Ave 'Em. Her most recent West End stage appearances include Nell Gwynn, for which she received an Olivier Award nomination, The Importance of Being Earnest and When We Are Married. Claire Machin’s credits include My Fair Lady, Mary Poppins, Betty Blue Eyes and Memphis. Claire Moore originated the role of Ellen in Miss Saigon. Her other credits include Christine in The Phantom of the Opera, Fantine and Madame Thenardier in Les Miserables and the National Theatre’s award-winning London Road. Joanna Riding won the Olivier Award for Best Actress in a Musical twice for her roles as Julie in Carousel at the National Theatre and as Eliza Doolitle in My Fair Lady.

THE GIRLS is inspired by the true story of a group of ladies, who decide to appear nude for a Women’s Institute calendar in order to raise funds to buy a settee for their local hospital, in memory of one of their husbands, and have to date raised over £4million for Bloodwise. This musical comedy shows life in their Yorkshire village, how it happened, the effect on husbands, sons and daughters, and how a group of ordinary ladies achieved something extraordinary.

Gary Barlow and Tim Firth grew up in the same village in the north of England and have been friends for 25 years. With Take That, Gary has written and co-written 14 number one singles, has sold over 50 million records worldwide and is a six times Ivor Novello Award winner. Tim has won the Olivier Award and UK Theatre Award for Best New Musical, and the British Comedy Awards Best Comedy Film for Calendar Girls.

THE GIRLS will be directed by Tim Firth, with musical staging by Lizzi Gee, comedy staging by Jos Houben, design by Robert Jones, lighting design by Tim Lutkin, sound design by Terry Jardine and Nick Lidster, musical direction and orchestrations by Richard Beadle, with casting by Sarah Bird, and associate producer is U-Live.

THE GIRLS will be produced by David Pugh & Dafydd Rogers and The Shubert Organization.

Bloodwise, the UK’s specialist blood cancer charity, will receive monies from this production.