The Bodyguard - Show of the Month 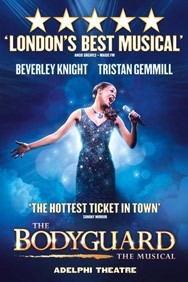 With Alexandra Burke due to join the cast of The Bodyguard, this film-to-stage spectacular has fast become the must-see West End musical.

When The Bodyguard first arrived in the West End in November 2012, no one doubted that the production would make a splash in the headlines, what with the Oscar-winning screen writer of the original 1994 film, Lawrence Kasdan, on board, the entire back catalogue of Whitney Houston hits and the formidable creative team of director Thea Sharrock and set designer Tim Hadley.

However, the big question for any big-budget musical is ‘will it run and run?’ Happily for The Bodyguard, some very clever casting has kept the production firmly at the top of the list of unmissable musicals in the West End.

The lead role of Rachel Marron – made famous by the late, great Whitney Houston in the Hollywood film version – was originated on stage by Broadway star Heather Headley, who went on to receive rave reviews from both critics and the general public.

Then, in September 2013, soul-singing superstar Beverley Knight made quite the stir in theatreland by taking over the part from Headley. This casting coup brought a new audience to the show in the form of Knight’s fans and other music-lovers who all flocked to the Adelphi Theatre to see this platinum-selling artist take on the iconic role. Now, with the announcement that Alexandra Burke is to take over from Knight on 2 June 2014, a new audience of younger fans, brought up on X Factor and iTunes, will be booking to see The Bodyguard.

The production itself is a taut thriller peppered with Whitney Houston’s knockout hits. The gripping story follows superstar Rachel Marron (Beverley Knight) who receives threats from a deranged fan, leading her management to hire a bodyguard to protect her from this dangerous stalker, ignoring Marron’s protest at the idea. Frank Farmer, ex-CIA or FBI (no one really knows) is the man given the job of protecting this diva and, of course, Marron takes an instant dislike to him.

However, after Farmer rescues her from a mob of fans after a concert gets out of hand, Marron develops a grudging respect for him. Their relationship grows from one of polite stiltedness to full-blown romance, but the sinister stalker still has his crosshairs pointed straight at Marron; cue dramatic climax at the Oscars.

What raises The Bodyguard above predictable melodrama is the depth of the characters. Rachel Marron is a psychologically complex character, full of conflictions and a hard outer skin that contains a very fragile centre. When called upon to burst into song at any given moment, the clever choice of songs reflects the situation and the character’s internal emotional conflict. The numbers are more than just pop hits; they move the story forward and help the audience glean an insight into the inner workings of the character.

The same can be said for the role of Nicki, Rachel’s younger sister, who lives perpetually in her shadow. The character of Frank Farmer (Tristan Gemmill) may not be as extrovert as two sisters, but it is exactly this quiet, stable presence that gives him an enigmatic quality, driving the intrigue that, in turn, drives Marron to form a bond with him.

In Thea Sharrock’s production, the action moves at break-neck speed, barely leaving room for the audience to catch their breath as one scene pushes into the next. There is an urgency to every exchange of dialogue that raises the tension and helps to keep up the frenetic pace. Sharrock does allow for a few choice moments of calm, but these are mostly given up to developing the romantic relationship between Frank Farmer and his ward.

Tim Hatley’s set and costume design for The Bodyguard is one of the best currently in the West End. A beautiful and clever mix of technology and practical effects combine to create a visually arresting production. Hatley employs four sliding screens that bisect the stage in all manner of configurations. Imagine a camera shutter that can focus in and out, while cropping out sections of the stage. This framing effect closes in on more tender moments, making them incredibly intimate, or widening to the full height and width of the stage for the larger, action-packed scenes.

Just when you think the sets can’t get anymore spectacular, a few moments into the second act and the audience is treated to a life-size log cabin that comes looming out of the darkness, complete with roaring log fire and snow-covered roof! The sheer scale of the cabin is enough to induce gasps from the auditorium, but what’s more impressive is the attention to detail. Real water issues from the taps, snow falls outside the windows and smoke billows from the chimney. It’s pure stagecraft at its best.

You can forget about classical musical theatre choreography in The Bodyguard: there’s no pas de bourrée to be seen, instead we get pop-inspired moves from choreographer Arthur Pita reminiscent of MTV. Similarly, the orchestrations by Chris Egan keep to this brash, ‘in yer face’ style. The music is blasted out as though at a giant arena concert, not a plush West End theatre, but therein lies the attraction to many.

The Bodyguard is currently playing at the Adelphi Theatre and booking until 30 August 2014.