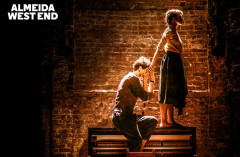 The West End transfer of Tennessee Williams’ intoxicating and rarely staged classic, Summer and Smoke, follows a sold-out and critically lauded run at the Almeida Theatre. Directed by the Almeida’s Associate Director Rebecca Frecknall with the full cast reprising their roles for the West End run, this innovative new production of Summer and Smoke has a limited run from 10 November 2018 - 19 January 2019, at the Duke Of York’s Theatre, with press night on Tuesday 20 November at 7pm.

Tickets are priced from £15 (£10 in previews) and 25% of all tickets for the West End transfer of Summer & Smoke will be accessibly priced at £25 and under. This includes a special allocation of tickets per performance made exclusively available for young people (aged 25s and under).

Summer and Smoke is designed by Tom Scutt, with lighting by Lee Curran, sound by Carolyn Downing, composition by Angus MacRae and casting by Julia Horan. The West End transfer of Summer and Smoke is produced by the Almeida Theatre and Sonia Friedman Productions.

The girl who said ‘no’ – she doesn’t exist anymore, she died last summer – suffocated in smoke from something on fire inside her.

Trapped between desire and a life of obligation, Alma meets John and her world turns upside down.

With ‘spellbinding, stripped-back staging’ (Financial Times), this intoxicating classic about love, loneliness and self-destruction evokes the simmering passions of a sweltering summer in small-town Mississippi.

Tennessee Williams, whose plays include The Glass Menagerie, A Streetcar Named Desire, Cat on a Hot Tin Roof and Sweet Bird of Youth, transformed the American stage through his poetic writing and provocative subject matters. Williams was awarded two Pulitzer Prizes and Tony Awards, three Drama Critic Circle Awards and the Presidential Medal of Freedom.

Nancy Crane plays Mrs Winemiller/Mrs Bassett. She previously appeared at the Almeida in Against and Chimerica. Other theatre credits include The Sewing Group, Now or Later, The Sweetest Thing in Baseball and The Strip at the Royal Court; Teddy Ferrara at the Donmar Warehouse; A Lie of The Mind and Next Fall at Southwark Playhouse; The Children’s Hour an the Comedy Theatre; Design For Living at The Old Vic; Love The Sinner and Angels in America at the National Theatre; Chains of Dew and Trifles at the Orange Tree Theatre; The Girl in a Goldfish Bowl and Six Degrees of Separation at the Crucible Theatre; The Price on UK Tour; Habitat at the Royal Exchange, Manchester; and A Wedding Story at Sphinx. Her television work includes Patrick Melrose; Black Earth Rising; Genius; Doctors; Nixon’s The One; Upstairs, Downstairs; Law & Order UK; Cambridge Spies; and Strike Force. For film, her work includes The Current War; Leavey; Megan Leavey; Florence Foster Jenkins; The Danish Girl; Woman in Gold; The Special Relationship; Batman: The Dark Knight; The Road to Guantanamo, Sky Captain and the World of Tomorrow; and The Machinist.

Patsy Ferran plays Alma. Her theatre credits include My Mum’s A Twat at the Royal Court; Speech and Debate at Trafalgar Studios; As You Like It and Treasure Island at the National Theatre; The Merchant Of Venice at the RSC; The Angry Brigade for Paines Plough; and Blithe Spirit at the Gielgud Theatre. Patsy’s television credits include Will; Guerrilla; and Jamestown (series regular). Film credits include Darkest Hour; God’s Own Country; Tulip Fever; The National Phobia; Association’s Day Out. She won a Critics’ Circle Theatre Award for Most Promising Newcomer in 2014, and was nominated for an Emerging Talent Award at the Evening Standard Theatre Awards in 2015.

Eric MacLennan plays Papa Gonzales/Vernon. For theatre his work includes Brave New World; 1984 at Creation Theatre; A Tale of Two Cities at Chung Ying Theatre; Government Inspector and Annie Get Your Gun at Young Vic; Henry V at Southwark Playhouse; Half-Life at the National Theatre of Scotland; and Cyrano de Bergerac at Manchester Royal Exchange. His television credits include The Night Manager and The Borgias. For film, his work includes Darkest Hour; Rogue One: A Star Wars Story; Mindhorn; Anna Karenina and Tale of Tales.

Matthew Needham plays John Buchanan. His previous work for the Almeida includes The Twilight Zone and The Treatment. His other theatre credits include Much Ado About Nothing, Imogen, The Comedy of Errors, Titus Andronicus and The Knight of the Burning Pestle at Shakespeare’s Globe; Henry IV Parts I and II, Love’s Sacrifice, The Jew of Malta, Candide and Titus Andronicus for the RSC; Our Country’s Good for Out of Joint; There is a Warat the National Theatre; Bingo and The Grapes of Wrath for Chichester Festival Theatre; and Shades at the Royal Court. For television, his work includes Endeavour; The Hollow Crown: Part Two; Monroe; and Sherlock. For film, his work includes The Ritual; and Stutterer.

Anjana Vasan plays Rosemary/Rosa Gonzales/Nellie. Her theatre work includes King Lear and A Midsummer Night’s Dream at Shakespeare’s Globe; Life of Galileo at the Young Vic; Image of an Unknown Young Woman at the Gate Theatre; Dara and Behind The Beautiful at the National Theatre; and Macbeth at Manchester International Festival/Broadway. For television, her work includes Sex Education; Hang Ups; Ill Behaviour; Black Mirror; Call the Midwife and Fresh Meat. Her film work includes The Children Act; Cinderella; and Jack Ryan.