by Oliver Mitford on Wednesday 22 January 2014, 8:51 am in London Theatre Reviews 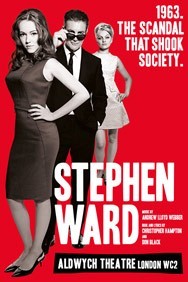 Everyone knows the work of Andrew Lloyd Webber. His musicals span almost four decades, with such iconic productions as The Phantom of the Opera, Jesus Christ Superstar and Cats, but since he dropped longtime lyricist Tim Rice, Lloyd Webber has had a hard time getting a new musical to stick in the highly critical and competitive world of London’s West End.

However, his foray into political satire with this musical about the Profumo affair comes as a much-needed curve ball that will delight old fans of his work and enamour a new audience. There is a sense of chaos and delightful naughtiness about the piece, which brings Lloyd Webber’s familiar romantic anthems into a place of frivolity and wit. It is this eclectic mix of musical styles and dark subject matter that makes Stephen Ward an interesting departure for the father of modern musical theatre.

Set in swinging 60s’ London, Stephen Ward tells the real-life story of a high society osteopath and his rise and fall through his implication in one of the biggest political scandals of the 20th century – the Profumo affair. Stephen Ward (Alexander Hanson) was a friend to film stars, spies, models, government ministers and aristocrats. His rise and ultimate disgrace coincided with the increasingly permissive lifestyle of London's elite in the early 1960s. The musical centres on Ward’s involvement with two beautiful women, Christine Keeler (Charlotte Spencer) and Mandy Rice-Davies (Charlotte Blackledge), and their chance meeting in a West End nightclub that leads Ward on a path to disgrace and tragedy.

With Stephen Ward, Lloyd Webber has abandoned the sung-through style that has been so characteristic of his earlier works. Instead, he has opted for a more freely flowing form in which the characters move seamlessly in and out of song and speech, allowing for greater depth in the storytelling and a highly contrasting production full of differing dynamics and textures. The score itself is gentle and hugely atmospheric, evoking the free-spirited world of the 1960s as well as a darker mood that lurks in the shadows of the production. Lloyd Webber does well to match the tension of the narrative provided by Christopher Hampton and Don Black.

With Stephen Ward, Lloyd Webber has [...] opted for a more freely flowing form in which the characters move seamlessly in and out of song and speech, allowing for greater depth in the storytelling

But Lloyd Webber turns on a dime and the next moment we are given pulsating reggae or upbeat 60s’ pop. The music is a bizarre mix, but one that matches the peculiar story and cemented in truth by the talents of the cast, in particular the trio of Alexander Hanson, Charlotte Spencer and Charlotte Blackedge. Hanson gives Ward a hidden vulnerability that shows just how he became the scapegoat in the first place. His powerful voice fills every corner of the Aldwych Theatre and is at times potently laced with hurt and sadness.

Spencer and Blackledge bring a clever balance of sophistication and sexiness to their roles. They both get to show off in a delightful hula-hoop routine during the Soho nightclub scene. However, the pair seems to disappear in the second half, leaving the audience wanting more. The supporting members of the company are brilliantly cast, with Antony Calf as Lord Astor, Daniel Flynn as John Profumo and Joanna Riding as the suitably wounded figure of Valerie Hobson.

Eyre has brought his usual fluid staging into great effect and racks up the tension with theatrical flair.

Richard Eyre is no stranger to new musicals, having directed Mary Poppins on Broadway and in the West End. With Stephen Ward, Eyre has brought his usual fluid staging into great effect and racks up the tension with theatrical flair. He has clearly captured the snobbery and prudishness of the early 1960s that lost the battle with sexual freedom and excess. Rob Howell’s lavish set design of swirling drapes combined with Jon Driscoll evocative projections helps to transport the action from Buckinghamshire to Venice and even to the Old Bailey courtroom.

Stephen Ward is an interesting departure for Andrew Lloyd Webber and a sign that he has a lot left to offer, even with 15 shows under his belt.

Stephen Ward is currently booking at the Aldwych Theatre until 31 May 2014.