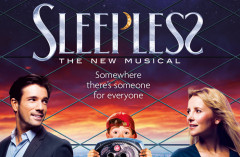 Due to an illness within the producer’s family and overwhelming unexpected circumstances, SLEEPLESS The Musical has been postponed. The producer hopes to have further news of the future of the production next year.

The world premiere of SLEEPLESS the Musical based on the Tristar Pictures Inc. film Sleepless in Seattle, starring Danny Mac, Carley Stenson, Jennie Dale and Cory English, was due to open at Theatre Royal Plymouth from 1 to 15 April, followed by a week at The Lowry, Salford from 25 to 29 April, and finishing at Bord Gais Energy Theatre, Dublin from 2 to 13 May, prior to a West End run.

SLEEPLESS has a book by Michael Burdett, music by Robert Scott and lyrics by Brendan Cull. The production was due to be directed by Morgan Young (Elf, White Christmas, Big), with set design by Morgan Large, costume design by Sue Simmerling, lighting by Tim Lutkin, video design by Ian William Galloway, sound design by Avgoustos Psillas and Terry Jardine for Autograph, orchestrations and musical supervision by Larry Blank, wig and hair design by Richard Mawbey and casting by Sarah Bird CDG.

The world premiere of SLEEPLESS was to be presented by Michael Rose and David Shor, in association with Marc Toberoff and the Bord Gais Energy Theatre, Dublin; a Theatre Royal Plymouth production.