by Best of Theatre Staff on Friday 14 February 2020, 10:29 am in Cast Changes and Announcements 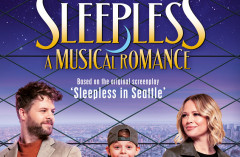 Jay McGuiness, Kimberley Walsh and Daniel Casey will star as Sam, Annie and Walter respectively in SLEEPLESS, A Musical Romance, based on the original screenplay Sleepless in Seattle. They are joined by Harriet Thorpe as Eleanor, Tania Mathurin as Becky and Jake Sharp as Rob. SLEEPLESS will premiere in London on 1 April 2020 at the newly opened Troubadour Wembley Park Theatre, London, with previews from 24 March.

SLEEPLESS is a new musical with a book by Michael Burdette and music and lyrics by new British writers Robert Scott and Brendan Cull and will feature a 12-piece orchestra.

Jay McGuiness came to fame as part of the successful boy band The Wanted. His fame widened when he won Strictly Come Dancing in 2015 with professional dancer Aliona Vilani. He and fellow bandmate Siva won the celebrity version of Channel 4’s Hunted in 2018, raising money for Stand Up To Cancer. Jay is also a regular contributor to the BBC’s The One Show and most recently starred in Rip It Up - The 60’s and BIG The Musical in London’s West End.

Kimberley Walsh rose to prominence in the record-breaking girl band Girls Aloud. During their 10 years together, the group achieved twenty consecutive top ten singles in the UK, including four number ones, with over 4.3 million single sales and 4 million albums sold in the UK alone. In 2012, Kimberley was runner up in Strictly Come Dancing. She has starred as series regular Rebecca in Disney’s The Lodge, played Claire Butterworth in the second series of Channel 4’s Ackley Bridge, and appeared in children's movies Horrid Henry and All Stars. In the West End she starred as Princess Fiona in Shrek The Musical, Jovie in Elf the Musical, joined Denise Van Outen for a week-long run at Cadogan Hall in Sweet Charity and most recently starred in BIG The Musical at the Dominion Theatre.

Harriet Thorpe is best known for her roles as Carole in the BBC’s The Brittas Empire and Fleur in Absolutely Fabulous. Harriet has performed extensively with French and Saunders, in Girls on Top, Mirrorball and The Life and Times of Vivienne Vyle. She also worked with Victoria Wood in Victoria Wood’s Mid Life Christmas. She recently finished a critically acclaimed run in Mame opposite Tracie Bennett, which played Hope Mill Theatre Manchester, Northampton Royal & Derngate and Salisbury Playhouse. Her West End credits include The Dresser, Great Britain, Wicked, Cabaret, Crazy for You, Mamma Mia! and Les Misérables. Films include The Writers Group, The Lady in the Van, Harry Potter and the Deathly Hallows, Calendar Girls, Zeffirelli’s Young Toscanini, Greystoke: the Legend of Tarzan, Lord of the Apes and Merchant Ivory’s Maurice.

Tania Mathurin most recently appeared in the West End musical Come From Away. Other recent theatre includes Day of the Living (RSC), The Comedy About A Bank Robbery (Criterion), The Book of Mormon (Prince of Wales) and Porgy & Bess (Regent’s Park Open Air Theatre).

Jake Sharp is currently the alternate Dewey Finn in School of Rock at the Gillian Lynne Theatre. He previously played Bill Austin in Mamma Mia! and Ben in Going Out West (which he co-wrote for the New Diorama, London/Just The Tonic, Edinburgh Fringe).

SLEEPLESS is the enchanting new romantic musical comedy based on the original story and screenplay of the romcom classic Sleepless In Seattle. SLEEPLESS tells the heart-warming tale of Sam, who moves to Seattle with his eight year-old son, Jonah, following the tragic death of his wife. When Jonah phones a radio show, Sam is forced to talk about his broken heart and sleepless nights live on air, and he suddenly finds himself one of the most sought after single men in America and a great news story for feisty journalist Annie on the opposite side of the country. Can Jonah bring the two together on the top deck of the Empire State Building? A fresh and lively book alongside a brand-new musical score bring this most timeless of romantic comedies to life on stage.

The world premiere of SLEEPLESS will be presented by Michael Rose, Encore Theatre Productions Ltd, David Shor and Marc Toberoff. General Manager will be David Pearson.