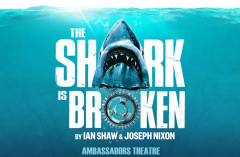 Sonia Friedman Productions is delighted to announce new dates for The Shark is Broken at the Ambassadors Theatre after the production was postponed last year due to the pandemic. Ian Shaw and Joseph Nixon’s brilliantly funny play will now run in the West End from 9 October – 15 January. Tickets will go on general sale on Thursday 1 July at 10am.

Current ticketholders will be notified of their new performance date by their point of purchase.

Cape Cod, 1974: shooting on ‘Jaws’ has stalled. The film’s lead actors – Robert Shaw, Roy Scheider and Richard Dreyfuss – are stuck on a boat, at the mercy of foul weather and a faulty mechanical co-star. Awash with alcohol and ambition, three hammered sharks start to bare their teeth…

A sell-out, critically acclaimed hit of the Edinburgh Festival Fringe 2019, The Shark is Broken reveals the hilarious and moving behind-the-scenes drama on one of Hollywood’s all-time biggest blockbusters, Steven Spielberg’s Jaws. The play is co-written by Robert Shaw’s son Ian, who also plays his father, and Joseph Nixon. Guy Masterson directs with the full cast and creative team to be announced soon.

Ian Shaw said: "I first watched ‘Jaws’ when I was about eight. I loved it, even though it terrified me! Like many others, sharks inhabited my dreams, and swimming was off the menu. Over forty years later, the prospect of playing my father in a play that Joseph and I wrote, and bringing to light the off-screen intrigue and comedy that went into the making of a masterpiece, is a unique and very special one."

Sonia Friedman said: “‘Jaws’ was made against all odds, and became one of the greatest films of all time. So, we always knew we had to bring this brilliantly original play to the Ambassadors Theatre in spite of everything. Ian Shaw and Joseph Nixon deliver a hilarious and uniquely personal perspective on one of the most legendary moments in film history, bringing three Hollywood icons to life onstage. Hysterically funny and oddly profound, ‘The Shark Is Broken’ is the sort of unexpected gem you only find at the Edinburgh Fringe, and I cannot wait to share it with West End audiences - at last!”