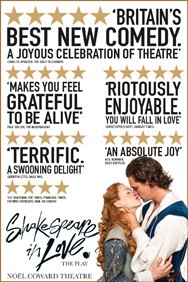 Back in 1998, film director John Madden embarked on bringing Tom Stoppard and Marc Norman’s screenplay Shakespeare in Love to life. The result was an incredible seven Academy Awards and a treasured place in the hearts of people across the globe. Now the warm-hearted and witty story has come to London’s West End, this time adapted from the original screenplay by Billy Elliot writer Lee Hall and directed by Cheek By Jowl’s artistic director Declan Donnellan.

What is evident from the start is that this story has always belonged in the theatre. It is a play about making plays and the theatrical setting works wonders as we are shown nightmare auditions, frantic rehearsals and backstage disasters. Lee Hall’s finely tuned adaptation retains the wit of the original screenplay, while also adding a high-spirited exuberance of its own that culminates in a delirious celebration of theatre itself.

What is evident from the start is that this story has always belonged in the theatre. It is a play about making plays and the theatrical setting works wonders as we are shown nightmare auditions, frantic rehearsals and backstage disasters.

Shakespeare in Love tells the mischievous and, at times, sweepingly romantic tale of William Shakespeare and his love affair with Lady Viola de Lesseps while he writes the greatest love story of all, Romeo and Juliet. Set the London of 1593, we are shown the promising young playwright Will Shakespeare in the throws of terrible writer’s block. What’s more, the deadline for the play is fast approaching and he has yet to put pen to paper – or should that be quill to parchment? But as fate would have it, Will falls madly in love with noblewoman Viola and she becomes his much-needed muse, enabling him to finish the play.

Director Declan Donnellan is a well known and respected figure in the world of international theatre, with his theatre company Cheek By Jowl performing acclaimed re-imaginings of classical texts all over the world. Donnellan and long-term design collaborator Nick Ormerod have recently seen huge critical success with Tis’ Pity She’s a Whore and Ubu Roi. Now the pair has brought their unique theatrical style to bear on a commercial West End comedy and the result is nothing short of spectacular.

With a company of 28 actors at his command, Donnellan revels in the non-literal nature of theatre, using the company as a Brechtian chorus, always present and interacting with the action on stage, bringing the most intimate of scenes into the epic. We are constantly reminded that the actors on stage, even though playing characters, are still actors and that we are watching a piece of theatre being created before our eyes, just as in the story of Shakespeare in Love, the play is being put together in front of us.

The vast array of scenes move quickly and jump location often. This is where Donnellan’s characteristic flair for seamless scene changes is given an outing and it should be noted that he is once again working with another long-time collaborator, movement director and choreographer Jane Gibson. The duo have created fluid swipes across the stage, using the entire cast to clear the last scene and set the new one with what appears to be effortless grace. This is accompanied by Paddy Cunneen’s period music, played by onstage musicians and sung by a male voice quartet. The voices soar and the sacred choral music transports the audience to a time where love at first sight existed. It sends shivers up the spine.

Nick Ormerod’s sumptuous wood-panelled set evokes the spirit of the Globe Theatre on London’s South Bank. The three levels of criss-crossing balconies that sit above the stage not only act as the numerous real balconies that are required by the play, but they also serve as watching platforms, from which members of the cast peer and lean out of the smoke-filled gloom to witness the events unfolding below them.

The simplicity of the design is especially delightful when the two lovers, Will and Viola, must board a small boat that ferries them across the Thames. Perched in the corner, two of the company start to wash the stage and the resulting sound of cloths being rung-out into a bucket full of water, helped along by some clever lighting, conjures the boat on the water better than any large and expensive stage water effect ever could.

The sheer stage poetry and unapologetic romanticism of the whole piece makes for an evening to ignite the soul and remember why we all make such a fuss about theatre in the first place.

The ensemble cast of 28 actors are all completely engaged and committed to the production. Lucy Briggs-Owen is utterly enchanting as the spirited cross-dressing Viola de Lesseps and Tom Bateman is suitably good-looking and earnest as he takes on the role of the great bard himself. The pair has a palpable chemistry between them that raises the romantic stakes somewhat when the tragic ending looms into view. There is excellent work also from Paul Chahidi, who gives a comic timing masterclass as Mr Henslowe and David Oakes charms even the most sullen-faced audience member as a very dashing Kit Marlowe.

This stage adaptation of Shakespeare in Love should be retitled In Love With Shakespeare, as it is clear that Declan Donnellan and designer Nick Ormerod have such a deeply profound understanding and respect for the great writer that you can't but help be caught up with them. The sheer stage poetry and unapologetic romanticism of the whole piece makes for an evening to ignite the soul and remember why we all make such a fuss about theatre in the first place.