Shakespeare In Love opens its doors to the public 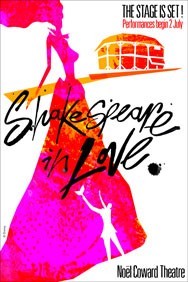 Based on the Oscar-winning screenplay by Tom Stoppard and Marc Norman, and now adapted for the stage by Billy Elliot writer Lee Hall, Shakespeare In Love has begun previewing to audiences at the Noel Coward Theatre before opening night on the 23 July 2014.

Set in 1593, Shakespeare In Love follows struggling young playwright William Shakespeare as he tries to cure a case of writer’s block. He is working on his new play Romeo and Juliet, when whilst auditioning for the part of Romeo he becomes infatuated with a young man named Thomas Kent, but this budding thespian is actually none other than Viola de Lesseps, a beautiful noblewoman who is taken with the idea of treading the boards. Shakespeare eventually uncovers Lesseps true identity and the pair of young lovers are set on a course that parallels the star-crossed plot of Romeo and Juliet.

Starring Tom Bateman (The Duchess of Malfi, The Tunnel) as Will Shakespeare and Lucy Briggs-Owen (Fortunes Fool, Noises Off) as Viola De Lesseps, the production is helmed by acclaimed theatre director Declan Donellan, and his long time collaborator and set designer Nick Ormerod. The show also features a huge company of over 28 actors, dancers and musicians and one very temperamental dog!

Shakespeare in Love is currently previewing at the Noel Coward Theatre, with opening night scheduled for 23 July 2014. It is currently booking until 7 February 2014.