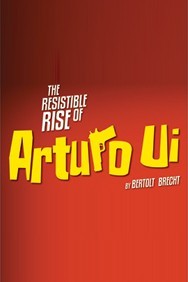 Henry Goodman gives the performance of his career in the West End transfer of Chichester Festival theatre's production of The Resistible Rise of Arturo Ui.

From the moment you enter the auditorium at The Duchess Theatre there is a palpable buzz in the air. Greeted by a 1930s’ speakeasy filled with card-playing gangsters and an array of musicians, the production instantly transports you to the Al Capone bootlegging world of Bertolt Brecht's satirical re-imaging of the rise of Hitler, seen through the dealings of American mobster Arturo Ui.

Right from the get-go, veteran actor Henry Goodman literally explodes onto the stage and, from that moment on, no one can pull their eyes away from him

Right from the get-go, veteran actor Henry Goodman (Arturo Ui) literally explodes onto the stage and, from that moment on, no one can pull their eyes away from him. This tour de force performance built with such detail and observation shows the steady growth of desperate thug into a manic and mentally unhinged tyrant of a sort that brings a world to the brink of destruction. The supporting cast have got their work cut out just to match Goodman. But they do, even at times ascending to the heights of his brilliance, as can be seen with William Guant's portrayal of the old, but wise Dogsborough, with which we see a man pick the apple of temptation and be destroyed by the consequences.

The Resistible Rise of Arturo Ui is a funny and thrilling take on the rise of Adolf Hitler, as seen through Bertolt Brecht's satirical lens. The action is transposed to Thirties’ Chicago, where a country ravaged by the woes of the Great Depression must endure fear, corruption and unemployment – the perfect environment for a small-time gangster and his gang to take hold of the city and even the whole nation. As Ui and his henchmen build their protection rackets for the city’s vegetable trade, the noble and wise Dogsborough falls victim to Ui's control, enabling Ui's power to grow from the markets to the docks and inevitably the whole of Chicago.

Director Jonathan Church has pulled out every laugh possible in his thrilling production, which makes the moments of utter terror all the more potent. The show has been treated as a Brecht play should, in the greatest epic tradition where the actors are actors, playing the characters for us. This distancing from the emotional pull of the story forces a detachment that allows the audience to analyse the events, see the parallels and hopefully take the messages away with them. You could have heard a pin drop as Goodman delivered the final speech stating ‘But do not rejoice too soon at your escape — The womb he crawled from is still going strong’. Every audience member drew the parallel to our own economic slump and heeded the warning.

Simon Higlett’s dark and smoke-stained theatre set allows for all the changes in location and, at the same time, puts the action on a knife edge as the shadowy recesses of the stage produce actors from the blackness like monsters from the deep. Church keeps the pace turned up to full throughout, causing even the dullest of scenes to sparkle with energy and menace as the tone switches on a dime from the sublimely funny to the darkly sinister. George Tabori’s 1964 translation has been given a verbal spring-clean by Alistair Beaton, creating a text that brims with verbal fireworks and elegant nods to Shakespeare.

The acting is of a standard you would expect from a West End production, but what was so unexpected is the high quality of performances coming from some of the much younger and less experienced cast members. Hugh John’s Young Dogsborough was filled with detail and truth, showing the journey from smug trust-fund Charlie to a young man racked with guilt over his father’s corrupt actions. Charlie Hamblett’s Young Inna was similarly detailed. If these two young actors are giving performances of this standard now, who knows what they might be capable of in the years to come?

The Resistible Rise of Arturo Ui is a play of immense importance and it is so gratifying to see it performed by such accomplished actors, no matter their age

The Resistible Rise of Arturo Ui is a play of immense importance and it is so gratifying to see it performed by such accomplished actors, no matter their age. Whether or not you are familiar with Brecht’s work, this production is so utterly thrilling and thought-provoking that even a first-time theatre-goer will be swept away with the sheer theatricality of it. Go!

The Resistible Rise of Arturo Ui is playing at the Duchess Theatre until 7 December 2013.