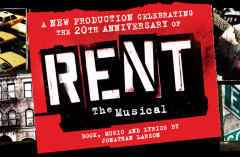 The 20th Anniversary production of Jonathan Larson’s Pulitzer Prize- and Tony Award-winning musical RENT is the fastest selling show in the history of the St. James Theatre, having sold the most tickets not only in a 24-hour period after on-sale, but also in the first week of an on-sale period. RENT also breaks the record for the most amount of money taken on the first day of sales, beating the theatre’s previous fastest selling show record-holders, Sideways and The Pianist of Willesden Lane.

Producer Robert Mackintosh said, "I am delighted that the reaction to the 20th Anniversary production of RENT, by way of ticket sales, has been so strong, especially for my first venture with co-producers Ingrid Sutej and Miguel Esteban.”

RENT will play the St. James Theatre in London from 8 December 2016 to 28 January 2017, with a press night on Tuesday 13 December, following a limited run at Theatr Clwyd and a three-week tour. 2017 tour dates are to be announced.

The much-loved score features songs such as Seasons of Love, Take Me or Leave Me, One Song Glory, La Vie Bohème, Without You, I’ll Cover You, Out Tonight, I Should Tell You and the title song.

RENT is produced by Robert Mackintosh and Idili Theatricals Limited, in association with Theatr Clwyd and Wales Millennium Centre.