by Best of Theatre Staff on Tuesday 29 May 2018, 3:13 pm in Cast Changes and Announcements 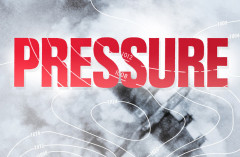 Based on the remarkable true story of two warring Allied meteorologists tasked with predicting the weather conditions for the D-Day landings, David Haig’s acclaimed play Pressure will transfer to the West End for a limited season from 6 June to 1 September 2018. The transfer follows a celebrated run at Chichester Festival Theatre (5 stars from the Daily Telegraph, Observer & Evening Standard), a national tour (in association with Cambridge Arts Theatre and Touring Consortium Company) and a sold out run at the Park Theatre.

Pressure is directed by John Dove, with design by Colin Richmond, lighting by Tim Mitchell, sound by Philip Pinsky, video by Andrzej Goulding and casting by Lisa Makin.

72 hours prior to the D Day landings, Scottish meteorologist, Group Captain James Stagg, advises General Eisenhower on the weather conditions likely to prevail when 350,000 troops are to be sent across the Channel in Operation Overlord. With Stagg predicting severe storms and Irving P. Krick – Hollywood’s meteorological movie consultant – predicting beautiful weather, the future of Britain, Europe and the United States rests on one single forecast.

David Haig (Group Captain James Stagg) is a five-time nominee and Olivier Award-winning actor best known for his roles in the film Four Weddings and a Funeral, TV series The Thin Blue Line and stage production of The Madness of King George III (UK Tour and West End). He is also an award-winning playwright. He wrote and starred alongside Daniel Radcliffe in My Boy Jack – which was made into a TV drama for ITV in 2007.

Malcolm Sinclair (General Eisenhower) has performed extensively in leading roles with theatre companies such as the National Theatre and the RSC. He has performed widely, both in Britain and internationally. In 2001 he won the Clarence Derwent Award for his role as Gavin Ryng-Maine in the National Theatre’s production of House/Garden and was also nominated for an Olivier Award for best supporting actor for his performance as Major Miles Flack in Privates on Parade.

Bert Seymour (Andrew) will be making his professional stage debut in Pressure (Ambassadors Theatre) after having recently graduated from LAMDA. Bert’s screen credits include: Endeavour (ITV1).

Mark Jax’s (Commander Franklin) stage credits include: Faithful Russian – The Story of a Guard Dog (Belgrade/Citizens); Richard III, The Lower Depths and Platanov/Sons Without Fathers (Arcola Theatre); Much Ado About Nothing (Queens Theatre Hornchurch); Romeo and Juliet (Home); As You Like It (Transport); A Soldier in Every Son, King John and Richard III (RSC); Three Musketeers (ETT/Traverse); Fast Labour (Hampstead Theatre); Rough Crossings (Headlong); Jamaica Inn, Barbarians and The Norman Conquests (Salisbury Playhouse); Macbeth, Way of the World, The Tenant Of Wildfell Hall and Atheists Tragedy (Birmingham Rep); Romeo and Juliet (Sheffield Crucible); Mansfield Park (Chichester Festival Theatre); A Chorus of Disapproval (Stephen Joseph); and The Futurists, Pravda and The Government Inspector (National Theatre). Mark’s screen credits include: The Road To 1984; The Most Dangerous Man in the World; Marco Polo; Merlin; Mary Mother of Jesus; In the Beginning; The Prime Minister; Desi Boyz; Frankenstein; The Vice; The Two of Us; and Stealing Heaven.

Mark Kitto’s stage credits include: Soldier On (UK Tour and The Playground Theatre) and while in China, Mark acted with the Shanghai People’s Arts Theatre.

Robert Heard’s (Hamilton) stage credits include: Eternal Love, Blue Stockings and The Taming of the Shrew (Shakespeare's Globe); The Famous Five (Gobbledigook); A Midsummer Nights Dream and The Merchant of Venice (Action To The Word); The Woman In The Moon (The Dolphin's Back) and The Two Noble Kinsmen (Just Enough). Robert’s screen credits include: The Royals.