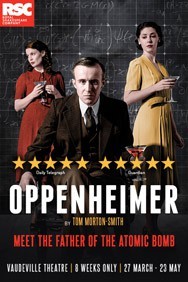 I love it when I've not only been entertained but when I've learnt something too. OPPENHEIMER delivers on both fronts. It’s the story of the über geek who invented the atomic bomb for America which was then unleashed on the Japanese city of Hiroshima, reducing it to dust and ending Japan’s participation in the Second World War.

It was and continues to be an act of great controversy. The devastation and loss of life it caused is almost incomprehensible but many argue that our fear of such weaponry has kept humanity from a third world war ever since.

Anyone with a smattering of general knowledge will be aware of these facts but what’s utterly engrossing is to see the events and people tied up in this historic event portrayed on stage. They really are poster boys (and girls) for geek power. Socially inept and scrawny yet with brilliant minds, even the disciplinarian U.S. Army gave up trying to get them into uniform. Their brilliance quite simply made them untouchable.

Central to the play, of course, is the character of Oppenheimer himself. Rather as Benedict Cumerbatch plays Britain’s own oddball World War Two, backroom boy, Alan Turing in the recent film THE IMITATION GAME, Oppie, as his friends call him, as portrayed by John Heffernan, is not easy to like.

Blessed with an extraordinary mind it’s as if he’s incapable of everyday human traits like loyalty and the need for affection. He ruthlessly works his way through women, blind to their unhappiness; many of those closest to him, including his brother become alcoholics and the communist principals he holds so dear in his youth are quickly dumped when they become inconvenient.

Yet thanks to John Heffernan’s skillful performance in the central role it’s very easy to see how people became enamored of this strange detached figure. When he gives them his attention he can make mass murder on an industrial scale seem like the simplest of matters and the most desirable of outcomes.

I hope Heffernan’s remembered by those who draw up the nominations for the best actor awards. I've seldom seen such a sophisticated, enigmatic performance. In this context it’s also absolutely vital that the piece is blessed with such a star performance. Key to our understanding of what happens has to be some notion of why no one was able to say “hold on a minute, stop!”

From time to time co-workers and family do attempt to put the brakes on development of the bomb but at such moments our man fixes them with his steely glare and with a smirk of almost delighted surprise, demolishes their opposition in an utterly charming way.

One of the most interesting questions that arises is quite how aware Oppenheimer is of his effect on those around him. The complexities of human interaction such as love affairs and managing his team seem to only engage him like the passing sting of a paper cut, before he returns to the great task in hand, mastering nuclear physics.

This is a brilliant play by the relatively unknown playwright Tom Morton-Smith. He manages to make science understandable, or more importantly seem understandable, to someone as unresponsive to it as me whilst all the time engaging us with the human drama of those kept isolated in the Nevada Desert with Oppenheimer as their king.

The piece also benefits from an assured and stylish production from Angus Jackson on a bare set by Robert Innes Hopkins that’s actually a huge blackboard on which the characters can excitedly scribble formula. Above the action are two metal beams and at the climactic moment the bomb itself edges slowly to centre stage suspended from one of them. There’s also a jazz band in the wings that bursts into little snippets of popular music from the time, bringing a much needed context from the world beyond the laboratories and tests.

Oppenheimer’s women come across as rather interchangeable but perhaps that’s the point. His real, great and only love was for the science that could wipe out civilisation.

There is a lot to listen to but if you fancy a fascinating history lesson, beautifully performed, staged and explained then this is well worth your time, concentration and focus.