ON YOUR FEET! The Story of Emilio and Gloria Estefan to play at the London Coliseum 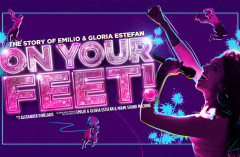 Jamie Wilson and Gavin Kalin are delighted to announce the UK premiere of ON YOUR FEET! The Story of Emilio and Gloria Estefan, which will play a limited season at the London Coliseum from Friday 14 June – Saturday 31 August 2019.

Prior to the London run there will be seven performances at Curve, Leicester from 3 – 8 June 2019.

Gloria Estefan said “The UK has not only been an important source of beautiful music for our world, but has also played an integral role in my own personal musical history. To have our life story playing on the stage of the iconic London Coliseum is a dream I could never have imagined coming true. I am thrilled and excited beyond words!”.

Jamie Wilson, Producer said “After watching ON YOUR FEET! on Broadway three years ago, we immediately knew we wanted to bring the show to the UK. The story of how Emilio and Gloria brought their music from Cuba to Miami and the world is truly inspirational. We can’t wait for UK audiences to watch, enjoy and have fun at ON YOUR FEET!”.

Stuart Murphy, CEO of English National Opera said “The London Coliseum is one of the UK’s great entertainment landmarks. As well as being the home of English National Opera, our iconic Frank Matcham-designed theatre, the largest in the West End, has played host to variety theatre, music hall and a cinema. Its original intention that it be pro bono publico (for the public good) has remained central to our work since ENO made its home here in 1968 and its history as the “people’s palace of entertainment” makes it perfect for hosting a whole range of different types of musical storytelling. We are delighted to welcome the UK premiere of ON YOUR FEET! and know that audience members will have a brilliant night out”.

ON YOUR FEET! is the inspiring true love story of Emilio and Gloria and charts their journey from its origins in Cuba, onto the streets of Miami and finally to international superstardom and features some of the most iconic pops songs of the era, including ‘Rhythm is Gonna Get You’, ‘Conga’, ‘Get On Your Feet’, ‘Don’t Want To Lose You Now’ and ‘1-2-3’.

Gloria Estefan has sold over 100 million records worldwide and is the most successful Latin crossover performer in the history of pop music. In addition to her 38 number 1 hits across the Billboard charts, Gloria recorded the Oscar-nominated song ‘Music of My Heart’ and has received numerous honours and awards over the course of her illustrious career. Emilio Estefan is a founding member of the pioneering Miami Sound Machine, who created a brand new Latin crossover sound – fusing infectious Cuban rhythms with American pop and disco. Combined, they have won a staggering 26 Grammy awards.

The Tony Award® nominated show ran on Broadway for two years, playing for over 750 performances. It is currently on a two year US tour, whilst the production in Holland continues until August.

On Your Feet! tickets