New London Theatre to be renamed The Gillian Lynne Theatre 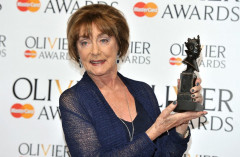 Andrew Lloyd Webber has announced that the New London Theatre, currently home to School of Rock, will be named after legendary West End choreographer Gillian Lynne.

Lloyd Webber’s Really Useful Group have owned the theatre since 1991, and through a statement he has announced the theatre would be renamed the Gillian Lynne Theatre later this year, and will be the first West End theatre named after a woman.

He said: “I am delighted to be able to announce that the New London Theatre is to be renamed as the Gillian Lynne Theatre. Gillian has been a pioneer of British musical theatre and dance.

“Gillie’s ground-breaking work on Cats inspired and launched countless careers in dance. It is only fitting that the theatre in which she created Cats is named in her honour.”

Lynne’s extensive choreography has made her a renowned figure in the West End. She has worked on many of Lloyd Webber’s musical including Cats (which ran at the New London from 1981 to 2002), The Phantom of the Opera and Aspects of Love.

Lynne said: “The minute I heard Andrew’s music I fell in love with his ability to channel deep emotion into a single musical note.

“He continues to inspire generation after generation with his passion for musical theatre and Great Britain has benefitted enormously from his brilliance and his generosity.”

The choreographer was given the Special Award at the 2013 Olivier Awards, and was made a Dame in the 2014 New Year’s Honours List for services to Dance and Musical Theatre.