by Oliver Mitford on Friday 7 February 2014, 8:25 am in Cast Changes and Announcements 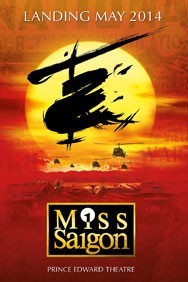 It has been announced that the final unknown casting choice for Cameron Mackintosh’s new production of Miss Saigon due to open at the Prince Edward Theatre on the 3 May 2014 is none other than Korean mega-star Kwang-Ho Hong. This solo artist regularly sells out giant arenas in his native Korea and is also known as one of the top musical theatre performers in Korea, with credits that include Raoul and The Phantom in The Phantom of the Opera, ”, Dr. Henry Jekyll & Edward Hyde in Jekyll and Hyde and Man of La Mancha.

This epic love story of Miss Saigon tells the tragic tale of young bar girl Kim, orphaned by war, who falls in love with an American GI called Chris - but their lives are torn apart by the fall of Saigon and the differences in cultures.

Tickets are selling a record speed so get booking in order to secure your seats for this unmiscible production!